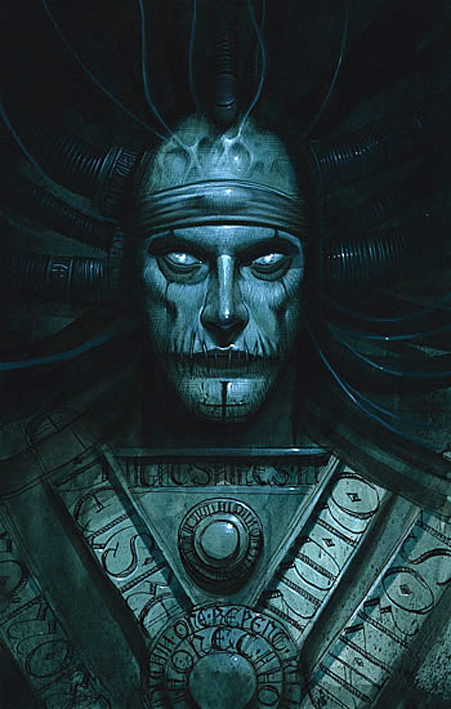 “She bared her teeth in an expression too ugly and defiant to be a smile. ‘Have you ever considered just what kind of creature you serve?’
‘Yes.’ The dark eyes stared on. ‘Have you?’
‘The “Master of Mankind”.’ She shook her head, feeling the welcome flare of righteousness. ‘He isn’t even human.’
‘Minister Zu.’ The golden warrior made a warning of her name. One she didn’t heed.
‘Does He even breathe?’ she demanded. ‘Tell me that, Custodian. Have you ever heard Him breathe? ”

Excerpt From: Scrivener Dembski-Bowden. “The Master of Mankind.” 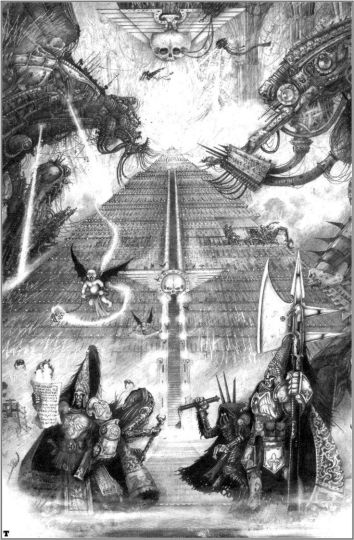 The Adeptus Custodes were known originally as the Legio Custodes or Custodian Guard. The original Custodians were the first genetically and psychologically altered warriors to appear in the Emperor’s armies during the Terran Unification Wars, where they served as the Emperor’s personal bodyguard. However the origins of the Custodian Guard are shrouded in myth and legend. Some say that the Custodian Guard are to the Emperor what the Space Marines are to the primarchs; that the Emperor’s own genetic matrix was used in their Gene-seedcreation and through this, their loyalty to him is assured. Others argue that the Custodians are not like the Emperor in the way that a Space Marine is like his primarch, and that some other source was used as a template for their physical and psychological form, a source that was lost during the anarchy of the Age of Strife. The truth will likely never be known.

The genetic enhancement that forms the Custodes is different from and predates that developed to create the Space Marines. Each Custodian is a unique work of art, the product of genetic lore collected over many lifetimes. During the Great Crusade, the Custodes always kept a contingent with the Emperor for his protection, but also traveled individually as envoys. The Emperor valued the Custodians above all his other warriors, and while he was willingly to expend countless of his servants he was always hesitant to bleed his Praetorian’s. Since the Emperor’s internment in the Golden Throne, the Adeptus Custodes are believed to have taken a more limited role as protectors of the Imperial Palace.

He stood like a towering giant above his personal Green Court assembled around the immense moss covered table before him. A faint scent of old flowers emanated from the crevasses of his armour. Sverre Arrheniusse had yet to return from his Bio Pilgrymmage and The Elder One looked at the remaining Green Court of Genetor Mechanicvm, Satyrian Guards, Thorne Hags and Myste Weavers with anticipation. His face was barked and his bare hands were covered in lichen. He addressed the court with a deep and hollow voice.

“The Deck of Thornes has spoken.”

His voice rose together with the Silva Chorus, whose melancholic sounds ebbed and flowed through the canopy high above the table.

“Call for the Elder Ones to assemble…Wynter is coming!”

In the Aftermath of Pilgrym, a dire threat to Omnissiah and Mechanicum was discovered on Terra. Traces of techno-heresy believed impossible were subject to Inquisitorial Augur Seance and tracked back to a region of space called the Thorn Moons, at the outer fringes of the imperium. The Highlords declared the so-called Green Mechanicvm heretic, subject to immediate sanction. Envoy Nero of the Sigillites was despatched to summon the Emperor’s sharpest axe, traveling under the protection and mandate of the Custodian Guard and thus the Emperor of Man.

2016 Was a tough year globally. For Games Workshop it was a spectacular year of releases and engagement. Incredible miniatures were released. In stunning quantity. White Dwarf returned. Pilgrym happened encouraging alternative approaches to the hobby. And perhaps most importantly Games Workshop became much more tuned, open and energetic towards it’s customers.

The stunning Adeptus Custodes kit is the symbol of that change and positivity. Never in a million years did I imagine Games Workshop releasing a kit of these warriors. And what a kit it is.

I built mine with the subtlest of modifications, based to match the IVth legion they will fight alongside with and it was always going to be about the paint job. I wanted contrast, texture, impact and a monochromatic heart of golden terra in the midst of the thunderstorm grey Rout.

Here are the results. First set of pictures under dayligh bulb light, then some in sun light alone and finally a set shot under a LED task light with colder tone. After the images I’ve briefly explained how this paint job was achieved. 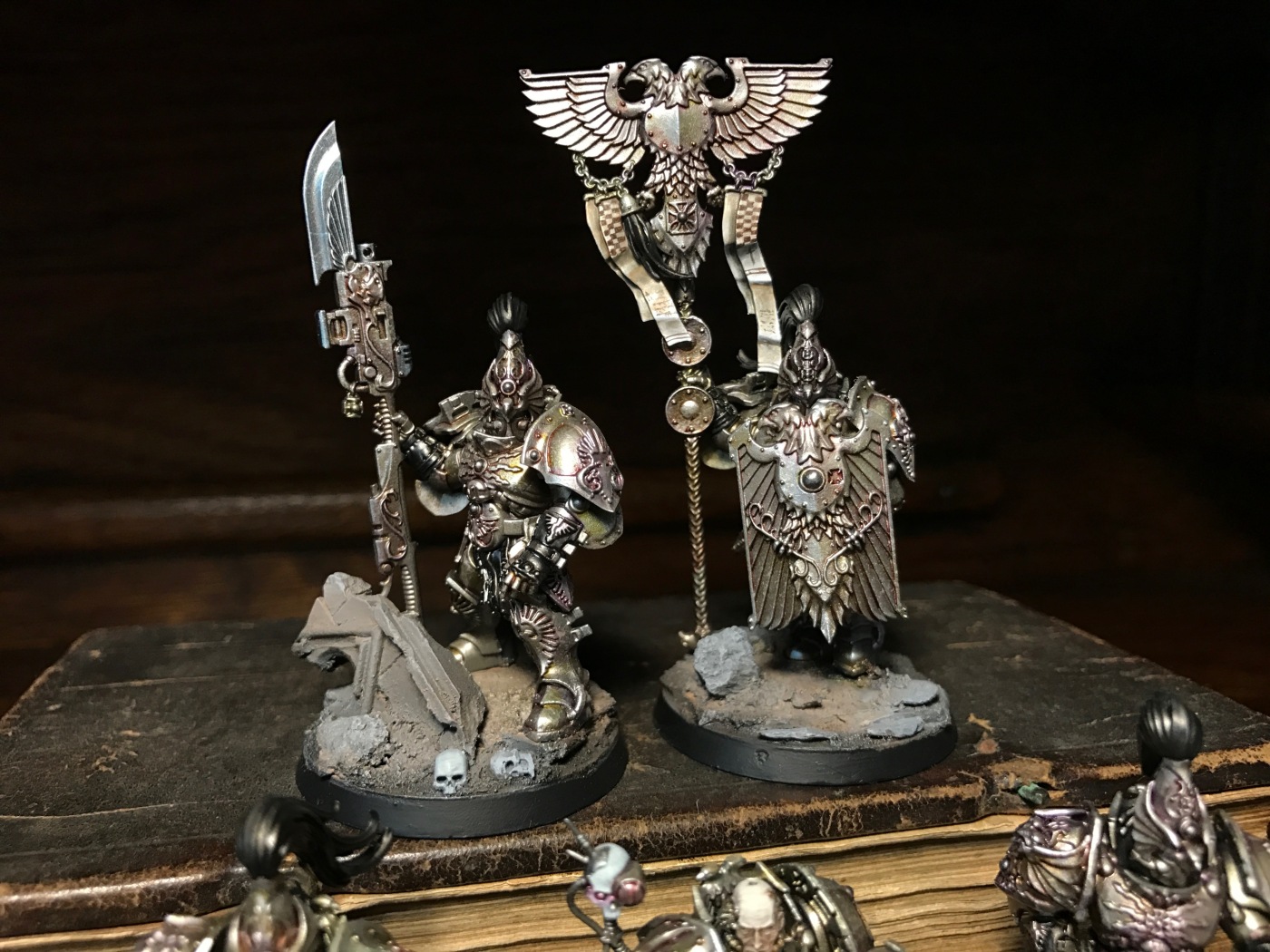 A goldless gold. Three layers of fantastic Scale 75 metallic (Black metal, Perdiot Alchemy, Trash Metal) airbrushed on black primer successively, in zenith highlight (from the top) kinda way. Then taking the trash metal and carefully dabbling some on the same way I do chipping, with a piece of foam to add intricate detail, including tiny size speckles not possible with a brush. Then a wash of purple ink, fairly liberal. Followed by precise washes of brown ink in the recesses and yellow here and there to add a hint more goldness. Then back to adding highlights with trash metal, and a very final edge and zenith highlight with the Humbrol metal 11, a super sharp and glossy final icing.

Now I paint like I cook, with passion and not instructions, so I make stuff up as I go and at the same time this is a culmination of years and years enjoying painting metallics.

The end result is a finish I’ve not seen else where, and that I’m really pleased with.