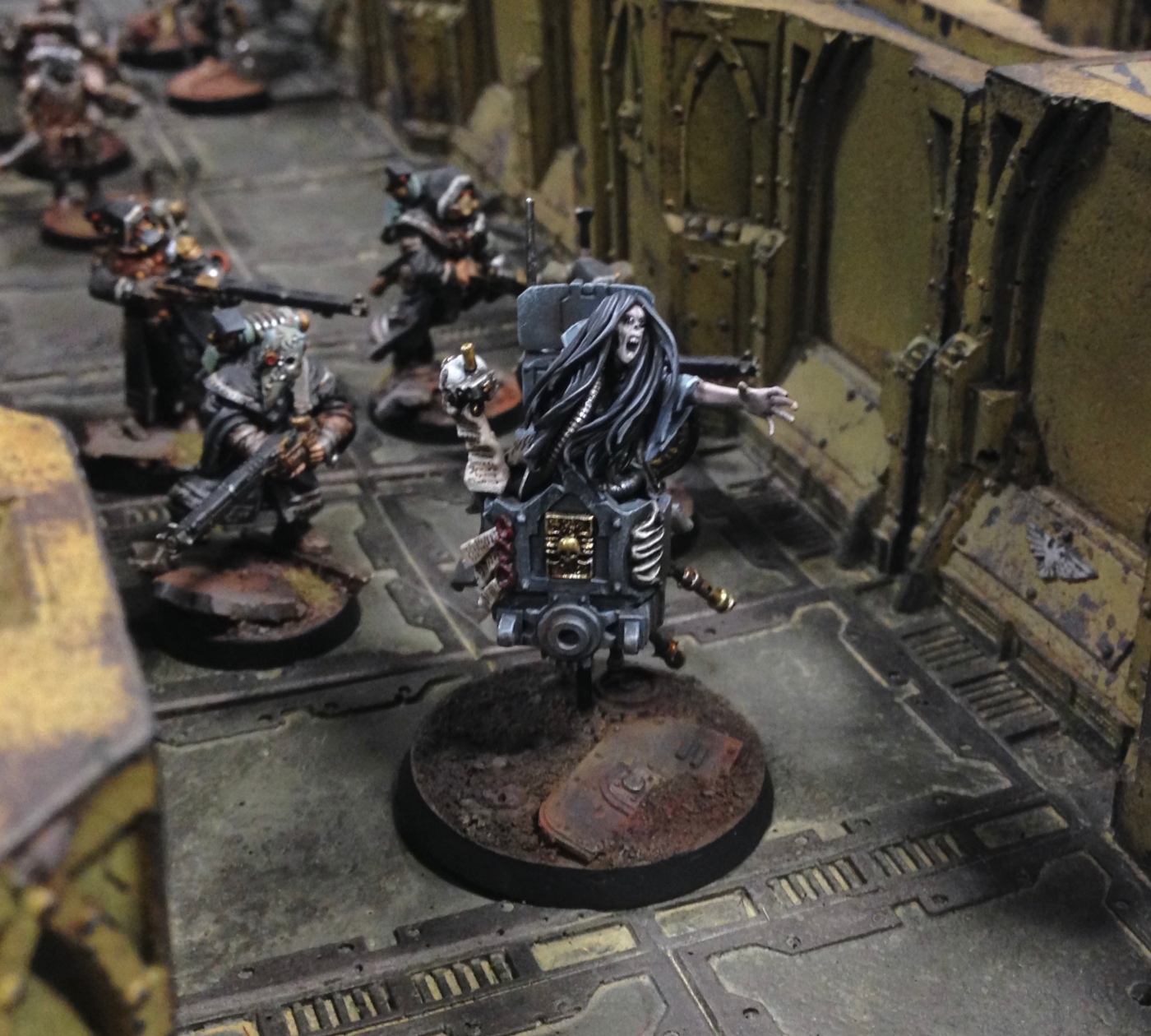 Astropath Borleen stared out the view port with blind eyes, the use of the view port an anachronism from long past, her psychic senses spreading across the void to the docking bays of Tumulus Gate void station. She liked to stay abreast of the vessels in dock and the likely need for her services. Her breath paused at a blank space, a hole in her vision, where a ship should have been. She now knew a warded black-arkke was docked at the void station but protocols of the Adeptus Astra Telepathica had not been adhered to. The master of the black guard should have visited her office and examined her for taint and deterioration, through Borleen knew she was not yet spent in her service to the God Emperor. On tired legs and using her staff for support she turned and walked to her ancient narlwood desk. With arthritic hands and crooked fingers she reached for her dataslate. Her fingers worked the dials and buttons and she touched the smooth screen, data began scrolling, raising small symbols distorting the smooth data reel. Her fingers read that the ship docked at bay IX was registered as a cargo vessel. Why this black-arkke was running under a false identity was not for Borleen to question; for she was a loyal servant of the Imperium.

Two null troopers of the Adeptus Astra Telepathica pinned her to her chair. She was completely blind, she was terrified. Was this why the black guard has not announced itself? They were here for her? Had she been found wanting? She heard him before the oppressive null blankness started to alleviate, the heavy limp of metal on stone. An armoured giant entered her chamber, his presence cold and hard like carved granite; he felt both pained and exhausted too. She whimpered and he spoke, the words bestowed upon her like a gift. “You are now a tool of His most Holy Orders of the Inquisition. More precisely you are now a tool of Captain-Inquisitor Lazaros. You are my tool, astropath Boreen. I need you to relay a message, in person, to a trusted colleague. You need to tell her, and no one else, where I am going and where she can find The Pilgrym. This information will be guarded by your mind, along with all that happens today. Take my word that if you choose to tell another soul your life will automatically end in utter torment. It is an important task I bestow upon you. For this will serve the Imperium and the master of mankind. Scan my mind now and take my cipher.”

A short moment of pride filled her as she considered that the Inquisition needed her. She opened her mind and conjoined with the uppermost layers of the aged Inquisitor. Power flowed through her and empyrium opened itself to her, freely giving her the strength to dig deeply, taking her, forcing her to look further than was asked and further than she ever intended to go. Tree daemons conversed through the sound of wind through woodland, images of Terra filled her, a child, a golden throne and corpse god, a malevolent Astartes in black armour standing over Terra, a daemonic weapon piercing the imperial palace, the golden child, grown into a woman, denouncing the black clad apostate. The jabbering trees stoked the power in her unconscious mind, they crucified the golden child upon ancient bark. But the daemons spoke too much and her mind slipped upon a hidden moon of thorns. At this the daemons retreated but not before gleaning the shape of Lazaros’ plans. She felt a wall of iron come up in Lazaros mind, his willpower created protection from this forced interruption. Twice he willed the Emperor and the third time he prayed. She felt him change his mind and message, a further level of unbreakable encryption placed upon it. He projected a name and image into her mind; Inquisitor Kovettell, this women filled Borleen with dread and almost un-veiled evil but according to Lazaros her intensions were pure. Then he showed her a medieval world and a mind map of how to find it through hidden routes in the Veiled Region of Segmentum Tempestus. Blackness enclosed around her and she felt Lazaros build a prison in her mind.

Borleen woke and her mind ached and body felt withered. Gingerly she reached out with her mind to find a tech adept connecting her to a life supporting hover throne, its front embossed with the symbol of the Inquisition. The station tech adept told her that this throne would support her and displace her from danger, for she must be alive to meet the Inquisitor. The adept sounded unsure and she felt his revulsion at the technology he was interfering and interfacing her with. She drifted back into unconsciousness.

She was startled awake by the sound of a single gunshot, she smelt blood and oil and heard the tech adept fall to the metal deck with a clang. “Remember what I said to you Astropath Borleen. You are a tool, you hold value. The tech-adept’s task was done but he could not be trusted. You will survive to complete your task. Do it correctly and you will survive after its completion.” Lazaros turned and left her there, the sound of his limp fading away. She knew she would never see him again but also that she was still in grave danger, her body wrecked and her mind a trap.

Beregus left the cargo bay of the guncutter and headed to the pilots deck. Anything to be away from the null warded sword casket, it’s humming and stuttering gnawing at his senses. He was not required, anyway, the Kovettell sisters muttered and planned amongst themselves. His task aboard the void station was simple, hired muscle. Apparently though the tarot cards and scryering the Inquisitor knew others had found the spool of Garm’s Maw. The void station’s astopath would hold a message; like a note in a bottle left bobbing on the voids currents. The astropath was not safe and the Inquisitorix needed to get the message and leave quickly and quietly.

Upon entering the deck the pilot looked at Beregus and gave a grim smile. “You get used to them you know. They might be unsettling but I’ve seen them destroy heretics and spare the Imperium from a heap of shite.” Beregus said nothing, he grimly nodded to the storm coat wearing pilot. Through the shuttles void lens a behemoth was coming into view, it was tiny but they were still an hour away. Beregus sat and waited to be summoned to the cargo bay. He knew he was mixed up in this now, trapped in it. There was no going back. He’d have to get used to it, because going back would likely end in torture and execution.

That great intro was by PDH.

A very special game was played yesterday at Warhammer World, extending the storyline of the Pilgrym. The warbands involved were crafted by john Blanche, Peter Hudson, Tim Molloy, and myself, with some miniatures by featuring artists thrown in the mix. The game was a veritable psychic storm, with the void station being absolutely cleansed by competing factions of the Inquisition. There was so much going on and so many heroic feats that they will fuel the campaign for months. But now I’ll just let the pictures do the talking: 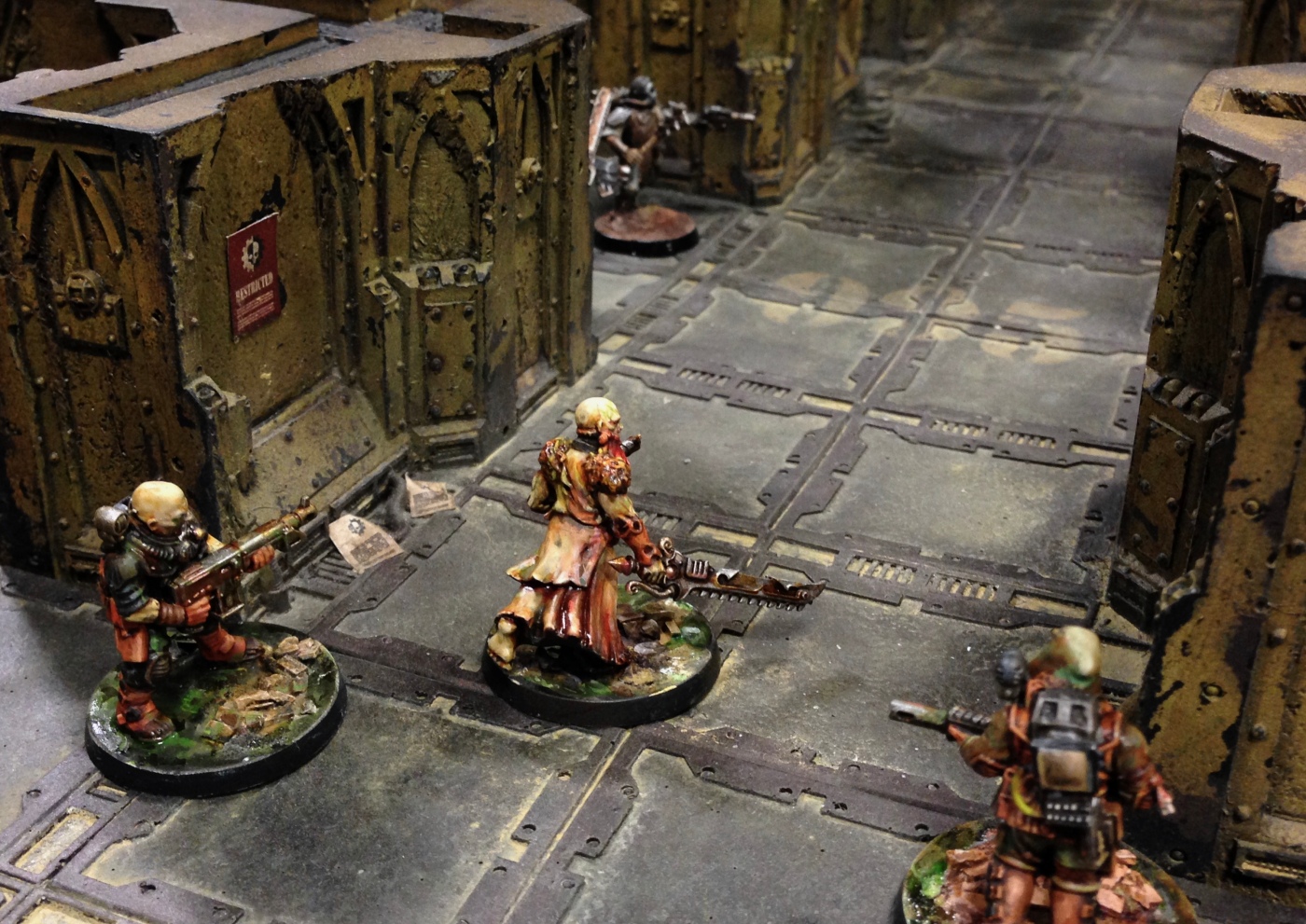 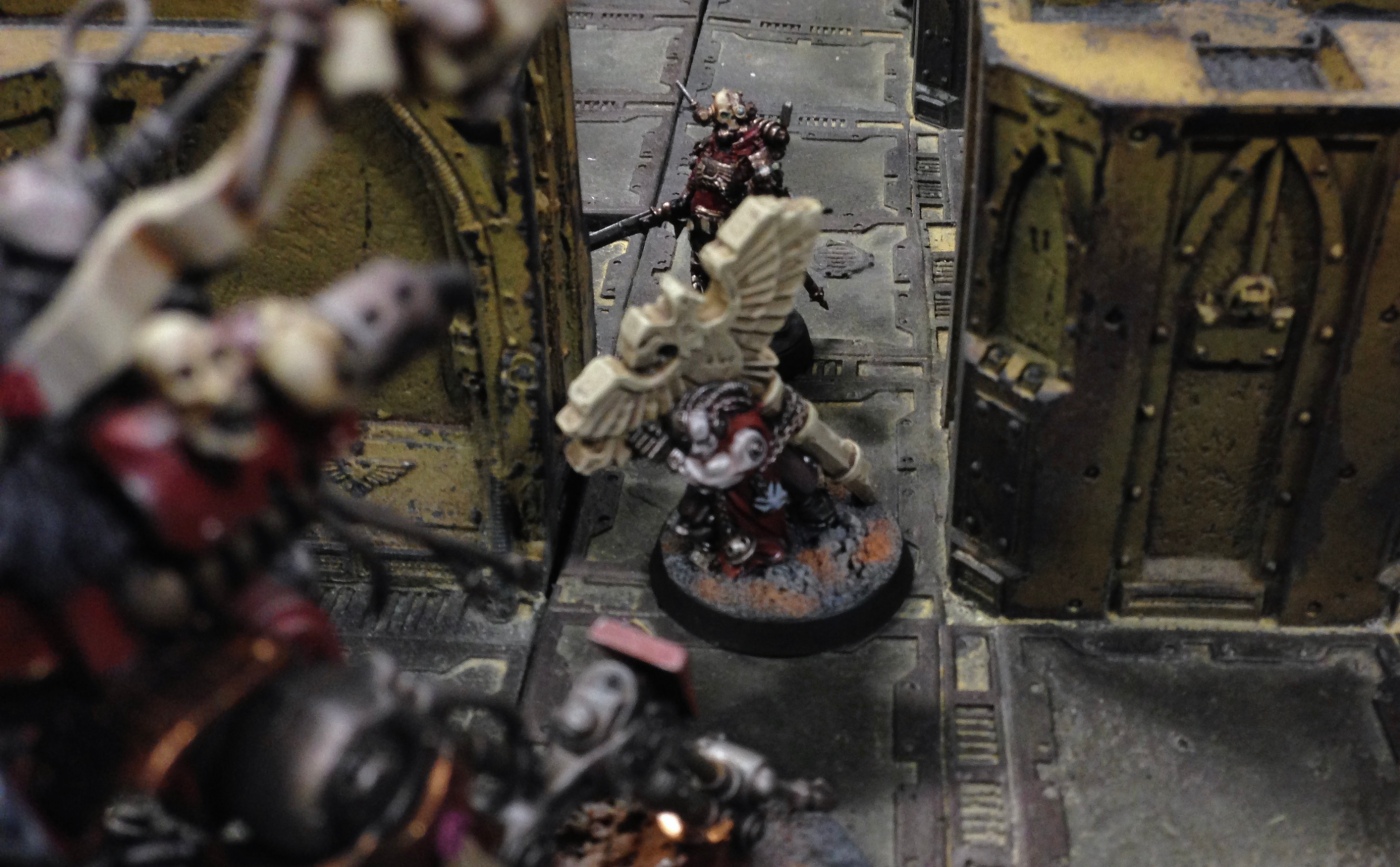 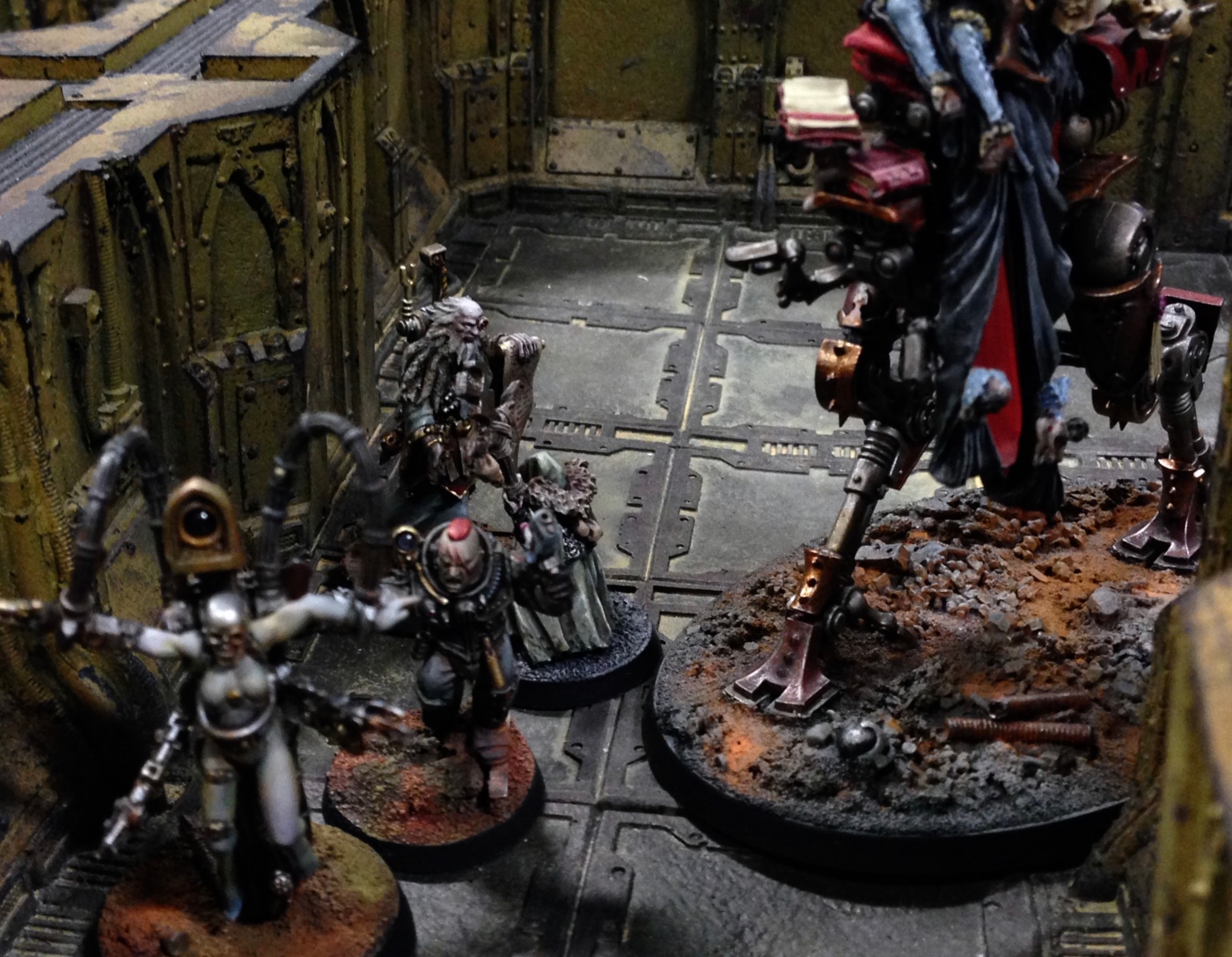 31 thoughts on “The Pilgrym – Extracting the Cipher”