In the grim darkness of the far future there is only war.

Intelligence was getting through the Rift from Crataegus Fragmentum faster and more frequent. It had been sporadic up until now, but it was as if a cloud had been lifted from the old region as the Thorn Moons were destroyed one by one.

After intense and relentless warfare on every single inhabited Thorn Moon, which had resulted in the destruction of untold biomechanical riches built up by the Elder Ones and the Green Mechanicvm over Millennia, the Imperial Crusaders were closing in on their main target of Daerwynne, 1st Moon, Library Moon. Only the Gate Moon stood in their way as the last boreal bulwark against their continued onslaught.

Welcome to the Green Gates!

A verdant world of hissing cables and live trees. 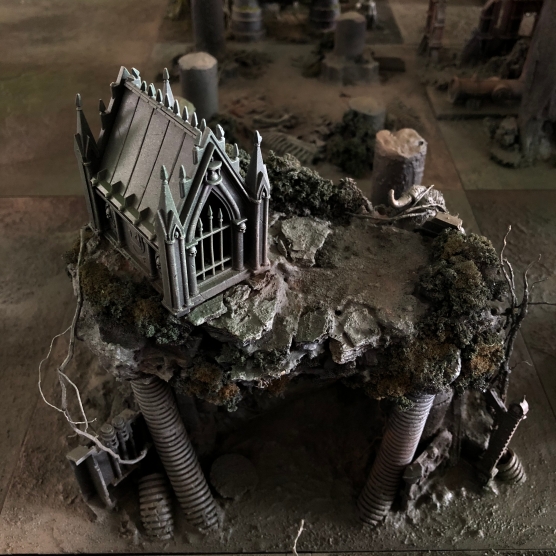 One of the Green Gates with a mausoleum honoring one of the Magos Biologis who built it Millennia ago.

The battle that commenced in the final days of Crataegus Fragmentum was immense and unforgiving. It was as if the Gate Moon was a vortex of destruction drawing in all the Crusaders for an epic climatic battle. Based on the intelligence gathered weeks before by the ferocious Vlka Fenryka on Lintear, 7th Moon, the Imperial Crusaders knew that the Viridis Clavem was hidden deep inside the bio-mechanical core of Gheal. The Viridis Clavem was the single most sought after artifact in the Crusade as it alone charted the way to Daerwynne, 1st Moon, Library Moon – the heart of the Thorn Moons.  In the course of only a few days the Gate Moon was one big battlefield. 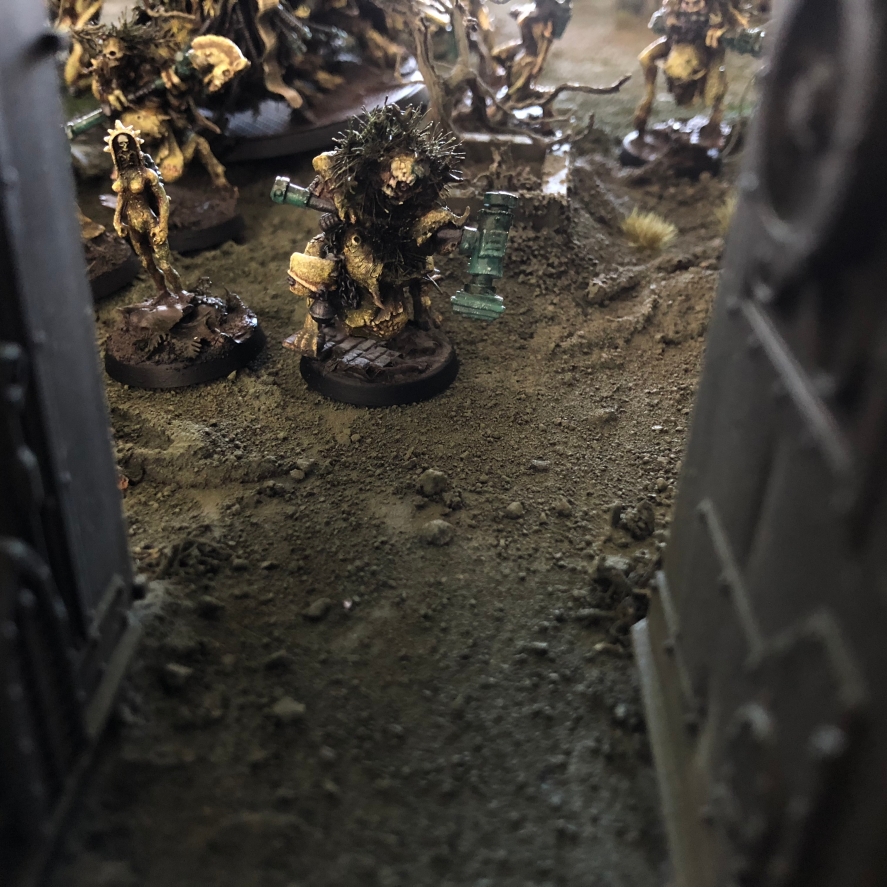 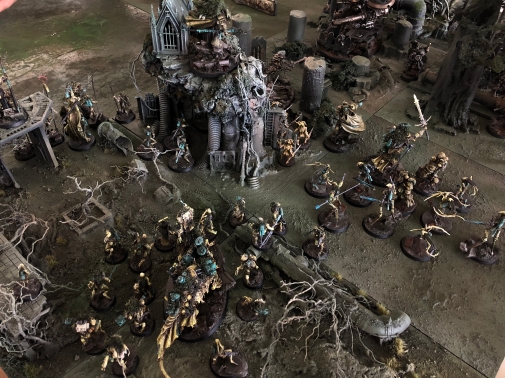 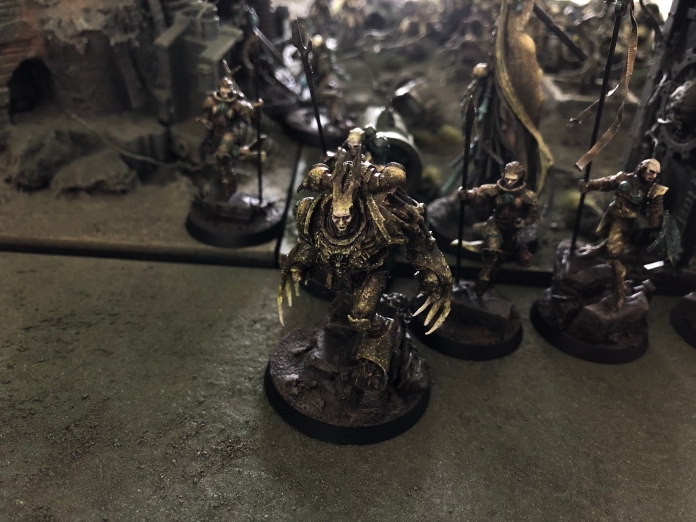 Lords of war decent on Gheal…

…with heavy firepower and massive Imperial Knights are brought to Gheal!

…and their Venerable Dreadnought eager to wreak havoc to the Crusaders.

The Defenders of the Moons bring their bio-mechanical constructs…

…while the Crusaders bring their newest technology to war!

On the verdant surface of Gheal the defenders, made up of the combined might of the Alpha Legion and Crataegus Legion, tried to prevent the extirpretation crusaders of House Akhum, a Death Company, a host of Space Wolves and a small armada of Imperial Knights and agents from getting through the massive Green Gates that led vertically down into the labyrinthine and bio-mechanical depths of Gheal itself.

An Imperial Assassin lurching deadly bolts at Oghamme from the shadows of the boreal!

While the Crataegus Legion swarm towards the defence of the Green Gates.

Even the Green Kyngge joins the fight of the Gates!

…and the war wages on the surface of Gheal.

Two lords of war battling it out!

The Navitis Militant had earlier in the Crusade been fighting the Red Corsairs and made them suffer heavy losses in the battle of the 15th Moon. But by forging their new alliance with the Red Corsairs during the battle of Carpinus IV, 19th Moon, the Crataegus Legionnaires were able to learn some of valuable secrets and vulnerabilities of House Akuhm. Most importantly they knew to not let them too close to the Green Gates as this would allow the Three-Eyed to disrupt their psybarriers and teleport deep inside the Gate Moon in their hunt for the Viridis Clavem.

In what has become known as the Battle of the Green Gates the boreal defenders fought ferociously against the onslaught. Haghænne, Tarot Queen, and her court of Thorn Maidens turned out to be a deadly force of combined psychic and close combat might. But despite heavy losses the Three-Eyed managed to disrupt the psy-barriers of the Elder Ones and teleport deep into Gheal, 3rd Moon, Gate Moon, in a last attempt to get to the Viridis Clavem and the key to the Daerwynne Palimpsest on Daerwynne, 1st Moon, Library Moon!

Haghænne and her Thorn Maidens face the wrath of House Akhum…

…but the psychic power and deadly swift close combat skills of the witches is too much for the Three-Eyed!

But the fight had already moved underground – the Golden Warriors of the Emperor had already brought their Imperial allies and heavy arsenal deep inside the labyrinthine and bio-mechanical underworld of Gheal itself!

Time was running out for the Elder Ones…

All games were fought using the new 8th edition with its mightily improved rules and game flow, which allow for quick and entertaining fights!