I stood upon the precipice and looked down, from the Bridge of Rays, into the chamber of the Lucem Murus Templum. Through exhaust fog and moisture traps I could make out the giant golden eagles protruding from the cathedra’s facade.  This most splendorous temple to the Emperor stood in the darkness and stagnant light of lume globes. I felt it ironic how ten thousand years of expansion had left this section of the Daylight Wall covered by a domed ceiling, letting in almost no natural light. Expansion upon Terra invariably meant building upon previous layers of civilisation. I knew that at the heart of the Lucem Murus Templum was a long disused bastion of the Imperial Fists chapter, the command post for the defence of this section of the outer Palace, all those years ago when the blood of loyalist and traitor alike had made this place run red with ruin. A feeling of dread, hope and unbearable foreboding shivered across my mind.

From the corner of my eye I saw a gentle dance of psyonics on Astropath Aikin’s psychic hood. I dropped my rosary beads to their maximum length and gently fingered the pearl beads. Since my arrival on Terra, whenever my precognitive abilities came to I saw back to the end of my pilgrimage…

“I stood on the observation deck. My three year pilgrimage to the homeworld near completion. Nearby the faithful sank to their knees, weeping and praying.  I gazed down upon Terra with a heavy heart and abject disappointment. I had resigned from the Ordo Xenos for this pilgrimage; the belighted jewel of the Imperium my destination. The stained glass within the Chapels and Cathedrals of Dalthus Prime had been a lie. Everything I had been told was a lie. This was not a shining beacon of hope but a dingy ball of filth suspended in space, surrounded by an adimantium wall of void ships and gun barrels. Thick brown clouds hung heavy in the atmosphere, spires pierced the veil into space and the ship was slowing running towards one of the transatmospheric docking ports. This planet was nothing but another hive world in a galaxy of a million. The Orks at Sword Point had taken most of my humanity. The failures of the Administratum had taken my devotion to the Throne. I had hoped my Pilgrimage would be an act catharsis and renewal but this vision of Terra took my faith.”

After that vision passed, my precognitive powers showed me what was to come: terror on the Lumen Murus Templum steps. The smell of mouldering wood, rancid machine oil and warp magic. Heresy, damnation and death. Brother fighting brother mirroring events long past. All accompanied by the sound of a screaming child and onerous organ music.

I confidently drew the bolt pistol on my hip. “Aiken, Pagett; take the baggage slaves to the undercroft entrance and wait for me there, be on guard.”

“Aye” barked Librarian Gailure Pagett, muffled by her rebreather helm. She prodded the closest bureauslave with stock of her lascarbine, indicating the new direction.

“The rest of you prepare for a battle on the Templum steps; steel your minds to the profane. We are about to face an ungodly enemy.”

Explosive rounds ripped through the crowd of baying pilgrims. Large calibre shells detonated in the tightly packed masses, on their journey venerating the God Emperor. I saw a number of pilgrims ripped from the stairs and plummet over the parapet. For the first time in twenty eight years, since my arrival on Terra, my hand grasped the grip of my pistol readying myself for a mighty battle. That it was a sworn representative of the Inquisition doing this slaying came as a shock. The massive iron clad Inquisitor took no heed of the destruction around him. My bolt shells impacted harmlessly from his armoured form. 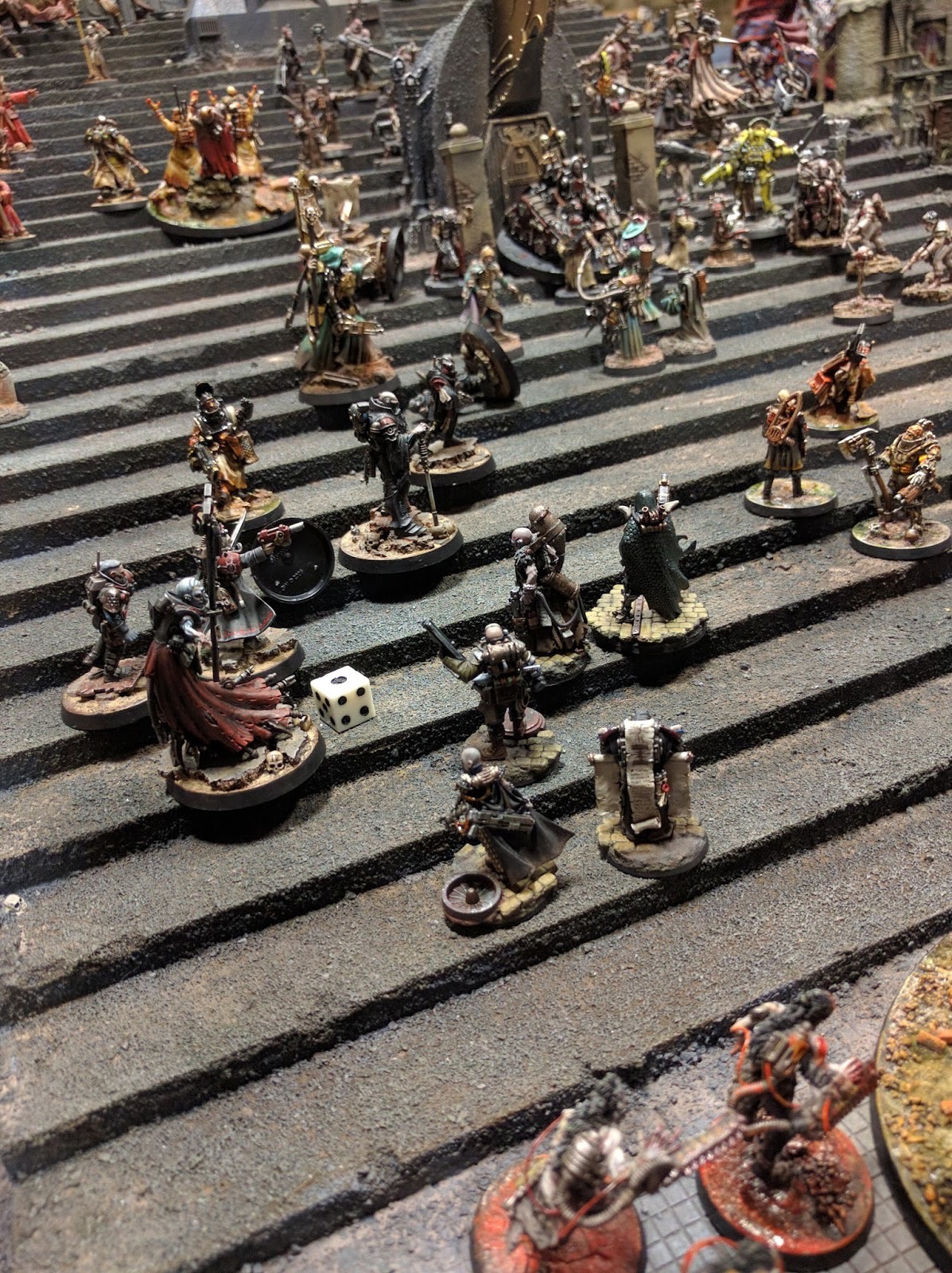 My psychic senses ached as a sound tolled across the Templum Steps, the hollow cry of a broken organ… onerous organ music. The air burned with taint and the sanctity of the homeworld was again violated. Through cracks in the stone steps, blinding yet sickly green light broke apart reality. Tendrils and roots took form and from this grew cankerous daemons… The smell of mouldering wood, rancid machine oil and warp magic. Heresy, damnation and death.

The black armoured Inquisitor failed in his duty to the Emperor and Terra, he ignored this terrible menace.

The walking memorial collapsed as explosions ripped and cracked the steps around it. Crumbling steps broke apart, the monolithic shrine lost its balance and it tumbled down the templum steps, with a roar of anguish and twisting metal. A score of pilgrims and a handful of daemons were crushed under its holy mass. Pinned under its bulk was my chief redactor, I could hear his screams of frustration and pain, his blessed flamers could no longer be relied upon to weed the daemonic from our realm.

After I squeezed the trigger, I watched the daemon splinter in an explosion of ichor and wood, burning the edges of reality. Reclaiming my bolt pistol from the Arbites now seemed worth the effort, previously it was a vanity. I was momentarily distracted by the thought of there being no Imperial enforcers on the Throne World; only Adeptus Arbites, who had confiscated my weapon on arrival twenty eight years earlier. It was only three years ago that they had returned my bolt pistol after sixteen requests, in triplicate, and three appeals. Understandably the Arbites do not trust the Inquisition. I was glad of the weight in my hand and the feel of the finely scripted prayers on the grip.

The daemons came upon the weapons of the Mechanicus, they perished under the arcane technology. With the immediate threat of a daemonic invasion taken care of I took a moment to rest. I looked up to the Templum entrance and said a prayer of benediction. To the left side of the steps a glow and crack of teleportation ignited the darkness… accompanied by the sound of a screaming child. To the right my enhanced vision noticed the most frightening of sights:

A battle between gods of war and a gold wrought Inquisitor… Brother fighting brother mirroring events long past. An Alpha Legionnaire on Terra bringing low a bastion of the Imperial Fists. As the Imperial Fist was murdered, his chest crushed, the gold wrought Inquisitor swung his mighty hammer crushing the back of the heretic’s skull. The gold Inquisitor fell to one knee in a pool of blood, the loyalist and traitor coming together once more in red death, mirroring the battle long past. 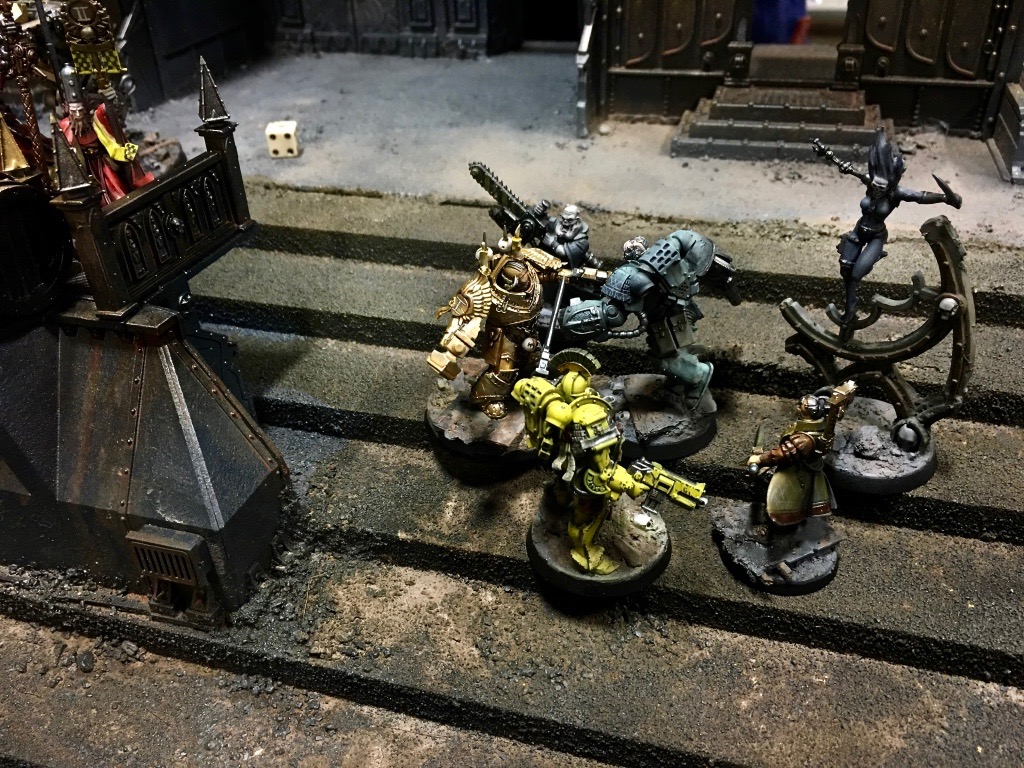