The day is here. Victory awaits before us in dark, empty space. The Imperiumme of Man has drawn a long breath, and is about to blow into the fire. Battle cries have been answered, and the brave regiments that answered have turned up resplendent. 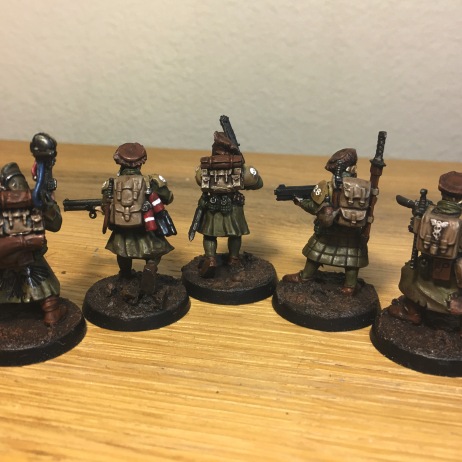 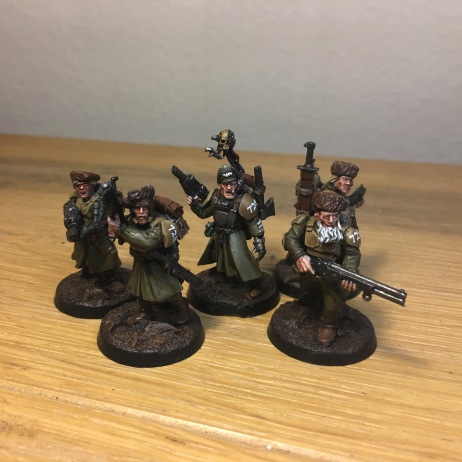 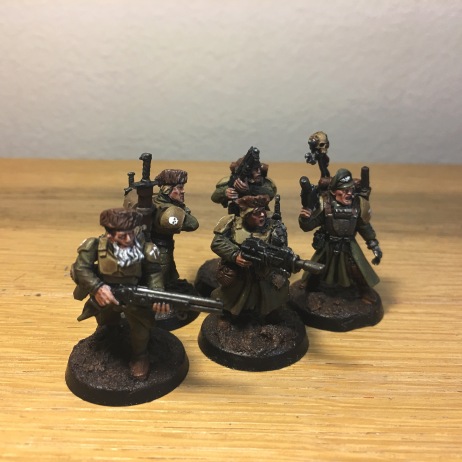 Tithed from the densely forested agri-world of Eliria IV the guardsmen of the 728th are born trackers who have guarded their sacred forest communities from off-world poachers and smugglers for centuries. Filled with wondrous creatures and what is rumored to be warp-touched pockets of fauna the Elirians have grown up protecting their land from the moment they could hold a rifle. These skills lend themselves greatly to military service and along with their imperial tithe of timber, the Elirians gladly tithe numerous regiments of both highly skilled light and line infantry in service to the Emperor.

Sergeant Giles and his men are veterans of two campaigns and now find themselves attached to the Thorn Moons Crusade, along with the rest of the 728th. Giles and his ment haven’t set foot on Eliria in nineteen standard years. They’ve seen men they used to hike through the Craxus Cliffs with be butchered by cultists and friends who had survived their entire ten year service in the Elirian Forest Militia be obliterated out of the sky during their first planetary invasion, but they have survived through it all and aren’t looking to change that in the Thorn Moons. 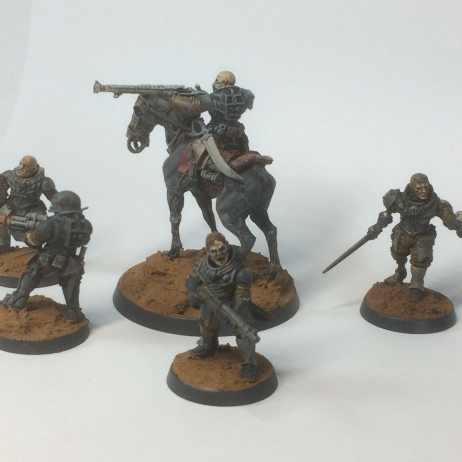 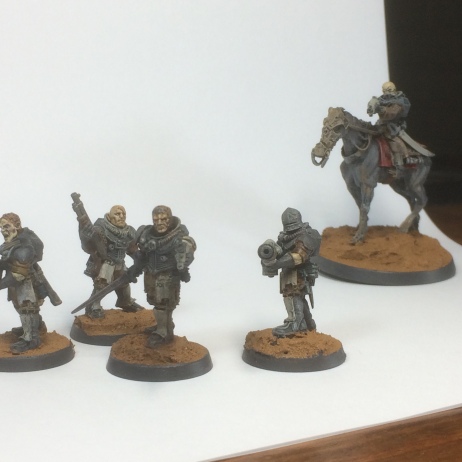 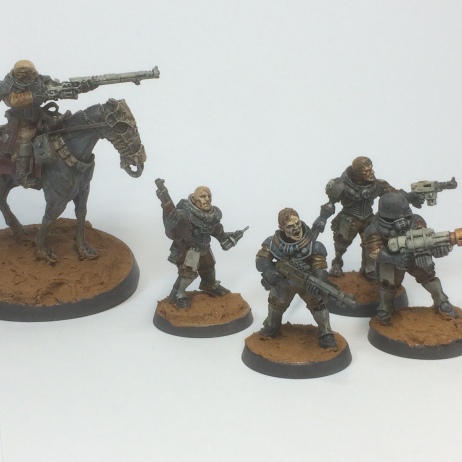 Catanza – covered in sand and jagged rock, marred by cold, unforgiving oceans. Ancient humanity made a home here, and against all odds, be they Beast, Xenos, and the planet itself, thrived.

From the marines that sail the oceans, workers strip-mining Catanza’s many moons, to Thresh Riders patrolling the desert dunes, the Catanzarites are a sturdy folk, quick to anger and quicker to laughter and jest.

Mounted scout-snipers ride out, covering ground rapidly, well-placed rounds removing officers and support weaponry before they can be brought to bear, while the Volcae assault from ambush, shotguns, grenades and melta announcing their presence.

Sailing the void, the Volcae-tithe come to the Thorn Moons under the Imperium of Man. Used to fighting in tunnels, trenches, and void-ship, on the gnarled Thorn Moons awaits the unknown. 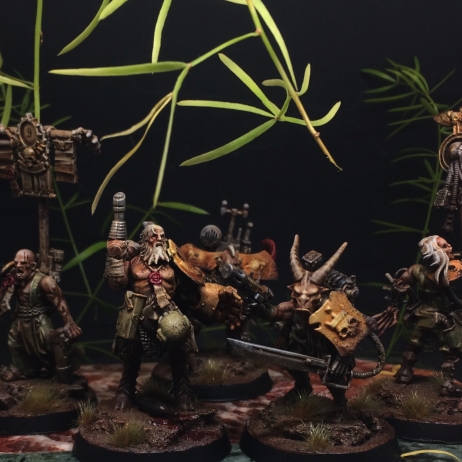 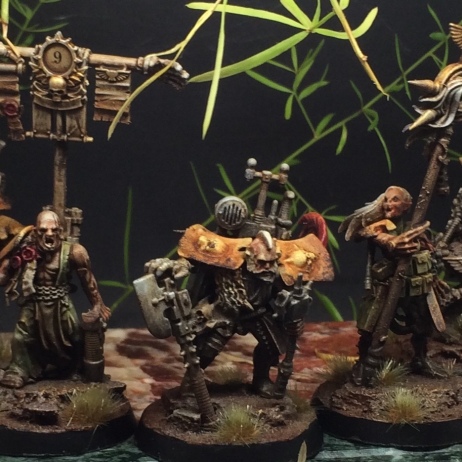 Snegurochka sensed the bulk of the herd moving through the foliage around her. The Thorn Moons reminded her of their own forested homeworld, Babayaga. Locked in orbit around gas giant, spears of radiation from the planet’s core had cursed its inhabitants with the mark of mutation. Judged stable, and thus suitable for labour, Imperial officials had raised levies from the warherds; they were cheap troops and perfectly adapted for reconnaissance in arboreal environments.

Downwind, Platoon Leader Satyrshank towered over two human officers. Snegurochka was excited by the stench of musk and wine from the massive Gor. The Imperials favoured him because they found his humanoid face less offensive, but his heart was wild as any champion in the Blood God’s herds. Born a psyker, Snegurochka had been more offensive, so her hooves and horns had been cauterized and replaced to make her fit for Imperial service. The Emperor was just another warrior god on Babayaga, and the priests had bought the herd’s loyalty with wine, weapons and stories.

The wind changed, just as the loyalties of the 9th would change when the time was right to dance in the woods with the Old Gods once again. 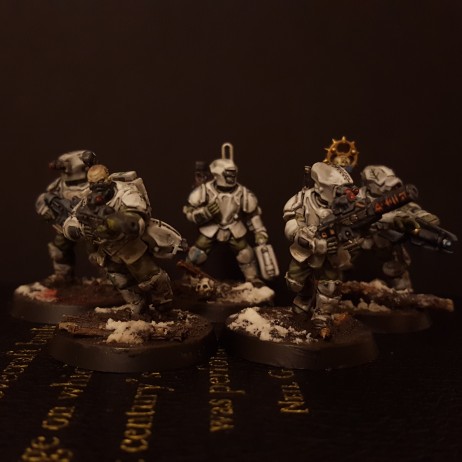 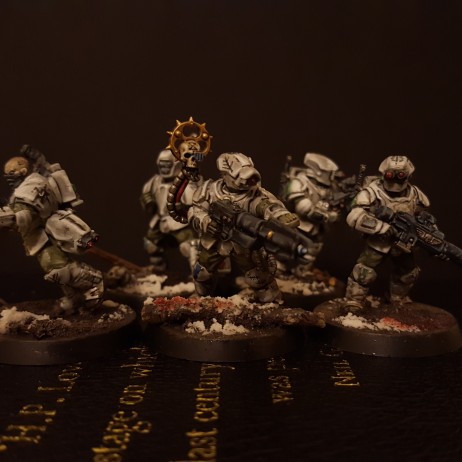 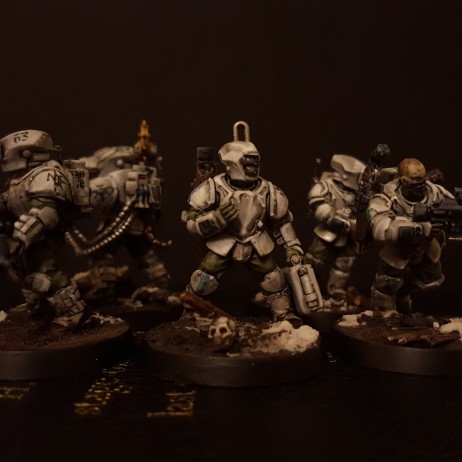 Through the Emperor, growth. Through growth, profit. – NorthStar Biologis motto.

Each recruit contributes a blood and humor sample upon induction for contribution to the Regimental Tree, an archeo-genetic construct that holds a little of the essence of every soldier in the regiment. So long as the tree stands, a record of each member of the 63rd lives. It is considered a great regimental honour to be rendered down into nutrients for the tree upon death; thus members of the 63rd will fight viciously to reclaim fallen comrades. Accompanying each squad is a Genetor-Sergeant, trained in both leading a squad in combat and identifying new plant samples on campaigns that may be of use to NorthStar R&D programs.

Due to their background, the 63rd were selected for the Thorn Moons Crusade. Troopers would find the moons to be a far cry from the placid orchards of their home system. 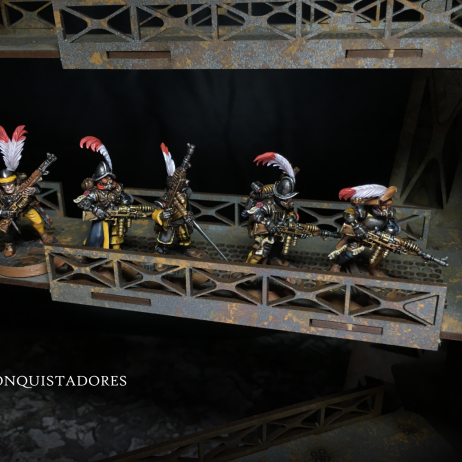 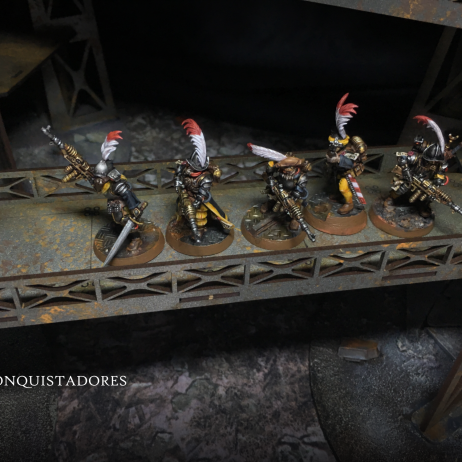 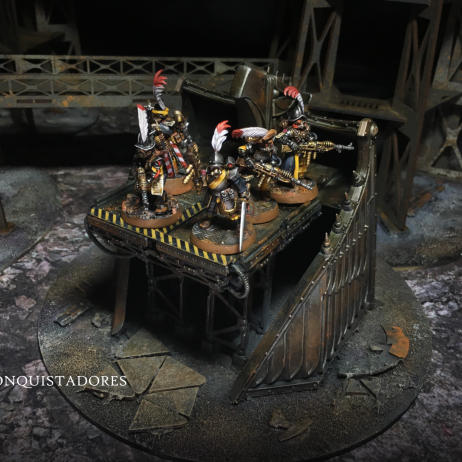 As above, so below. Above and beneath, spire and sump. We do not fear the dark, for we relight the depths.

For three centuries the ruling houses have fought down through the darkness of their sunken spires to reclaim the long lost heart of the world. This is the reconquest, and the regiments that fight to bring light to the depths are the Reconquistadores. House Cragmire, the upstart house, laboured in the shadow of their rivals until they received the Lord-Acquisitor and his explorator retinue from Mars. The other lords mocked him as “The clockwork Count with his clockwork court”. They stopped when the Duke of Bajazet was tried for tech-heresy by the Martian delegation and the augmented soldiers of House Cragmire seized his seat at Last-Light. Since then they have fought underground for a decade to clear the Machine Hall and relight the four blue galleries.

“Why has the Count sent us here?” ask the soldiers in hushed tones on the troop transports to Crataegus Fragmentum. “He has strange masters now. They say we’re to find something for them. Something they desire.” The men nervously recite the house litany as they descend towards the surface. We do not fear the dark. 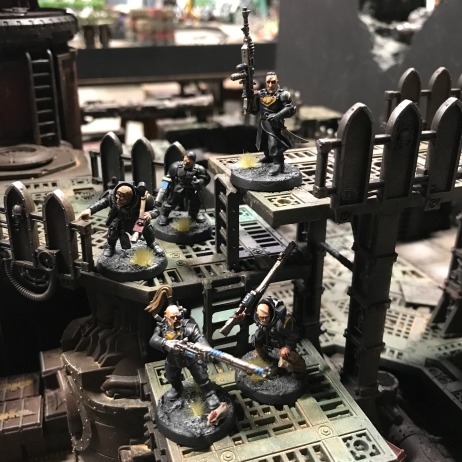 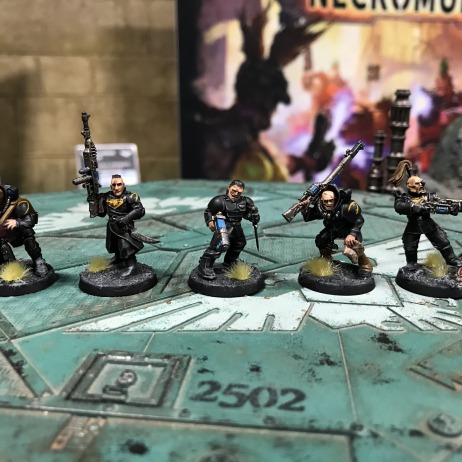 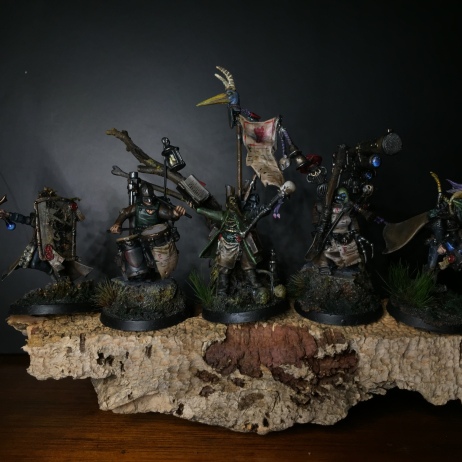 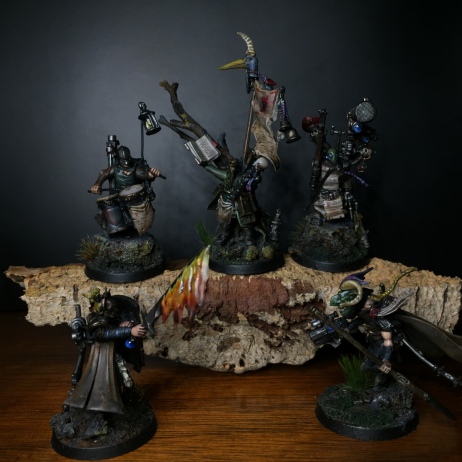 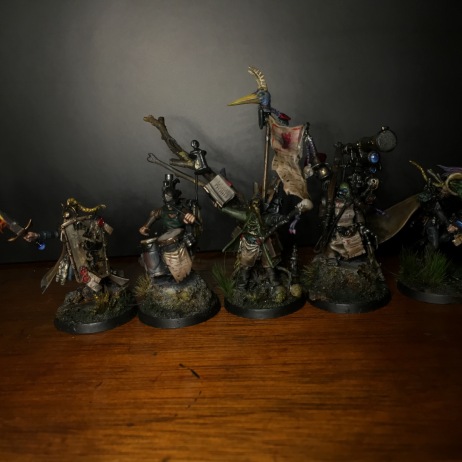 Having found a suitable symbol for the ritual, Lius Istorija donned the Narrators helm and waited. Looking across the dense green world he and his four companions found themselves, Lius thought, and not for the first time, of the small feudal planet of his birth:

The Praestare Regimental have been present at most prominent conflicts since the Great Crusade; a few small units lost amongst the human tide of the Imperium. The Administratum rarely have records of having paid for their service, unnoticed amongst the throng of fleets, ships and bodies.

The Commissars also ignore their unauthorised incursion. Their song and tales alleviate boredom and enforce piety within the regiments that they accompany. Yet it is the Praestare’s ritual that is performed before battle, which has proven them invaluable.

Lius watched as the Drummer and the Trumpeter took their place beside him, static hissing as the Trumpeters feed began to engage. In the shadows stood the two Performers: the God and the Xenos Threat.

The performers, veterans all, would enact the Emperors triumph over the Xenos.
The Drummer and Trumpeter would play along.
The observing regiments of the Astra Militarum would unknowingly lose their fear.
The green darkness would hold no terrors…. 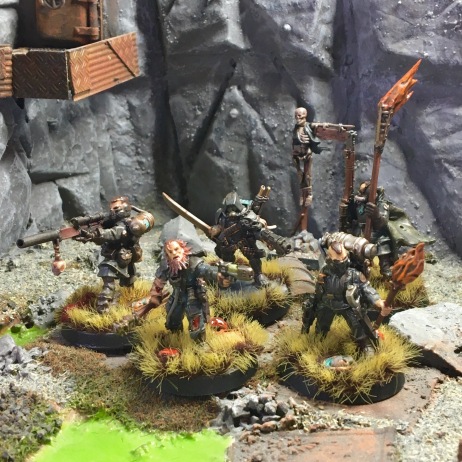 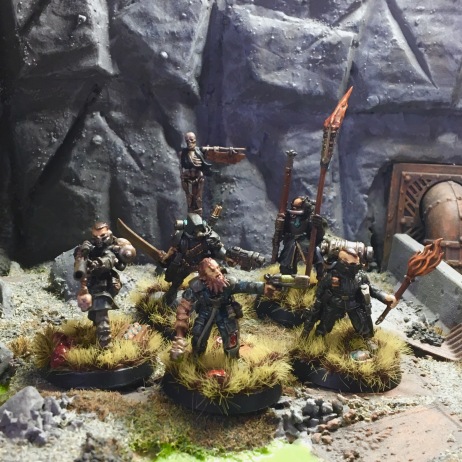 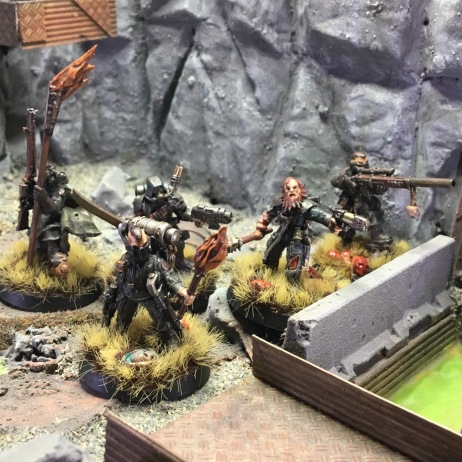 Sergeant Homer Drake of the Harakoni Warhawks has the dubious honour of leading the “Deaths Head”, a small group of men who exist on no troop roster. All recorded as deceased, all experts in covert operations. Himself a veteran of many engagements with the Xenos while in the Inquisitorial Stormtroopers he has discovered how twisted and despicable the Thorn Moons are and how they effect the average soldier of the Imperium. Underhive Bounty Hunter Javier “Predator” Vasquez, has always got his man no matter what the consequences. Having lost the large proportion of his face to a House Escher boobytrap he now resides behind a protective mask and cowl that helps keep him alive.
Leon Bazarov and his friend Vasily Kuznetsov of the Vostroyan First Born are both expert marksmen and long range observational specialists. Leon wields a sniper rifle equipped with a suppressor of his own design, and technical expert Vasily is able to improve Imperium optics and scanners to gain the best results.

Being the only infiltration team free in the Thorn Moons area of operations, their current mission sees them deep in the realms of the Green Mechanicvm. Captain Neegan Grimes has been missing for the last six months, driven to the edge of insanity during his time on the run after his Thunderbolt Fighter was brought down by an unknown force. His mission classified, he holds one of the keys crucial in the unlocking of the Green Mechanicvm’s resistance.

Finally, we are able to start the journey through all the Thorn Moons Regiments from you guys and girls! We are absolutely amazed by the sheer talent and creativity and as we want to give each entry as much space as possible it will take most of December to go through them all.

This is the first part of what we call Off World Crusaders where the description of exotic home worlds or the history of the regiments play an important role in bringing them to life.

15 thoughts on “Thorn Moons Regiments: Off World Crusaders, Part I”