Down. Deep down. At the rotten cold heart of Terra, crafted from stone and iron ten millennia ago. Lit by sanctioned candles, burning with the power of forbidden fats worth a fortune the small chamber flickered. A frail old master sat, surrounded by his powerful acolytes – all of whom would be instantly turned to ash with but a whisper from the power that resided in the ancient being. Each of the students collected their card. None dared to look him in the eye. The burning ice blue orbs, blind, yet all seeing.

A single ray of solar light hit the Double Headed Gate of the chapel, somehow exposing the golden wings, the noble beaks, through civilizations of rot, grim and soot. Every soul grinding the stairs felt it’s embrace. Some went blind, some mad, some laughed, some cried, but none escaped it. Least of all those special souls sacrificed for the 6.66 seconds the techno-arcana magik functioned each day.

And a glorious day it was, hundreds of Pilgryms made their way up the stairs, the 1st of nearly identical four that gave the gigantic chapel it’s shape from the stars. This was the entrance favored by those who traveled the furthest, for it received it’s solar rays the sharpest.

A single man stood immobile in the Botanicarium, part of it’s ancient clockwork, the forbidden remains of one of Terra’s lost wonders. It would witness a fateful day. The secret war for the soul of mankind would step out of the depths and shadows to claim its prize.

The first and the Last

The spires, such perfect vantage point. We have eyes on each of the entrances, and so much more.

There is Lazarus, the Black Lord, sailed from the warp to hunt the Pilgrym. The Psyocculum glowed bright with the hulking Inquisitor in its sights, but juts as striking were the voids around him, the soulless seamen of the ships and the carrion constructs floating around the retinue.

Brostten Haggwers, and his recently arrived circus biologic, with shapeshifting thorn guard, and equipment and material properties previously unseen to our augurs. Not surprisingly, emerging from the forbidden parts of the Botanicarium.

We would address them soon. 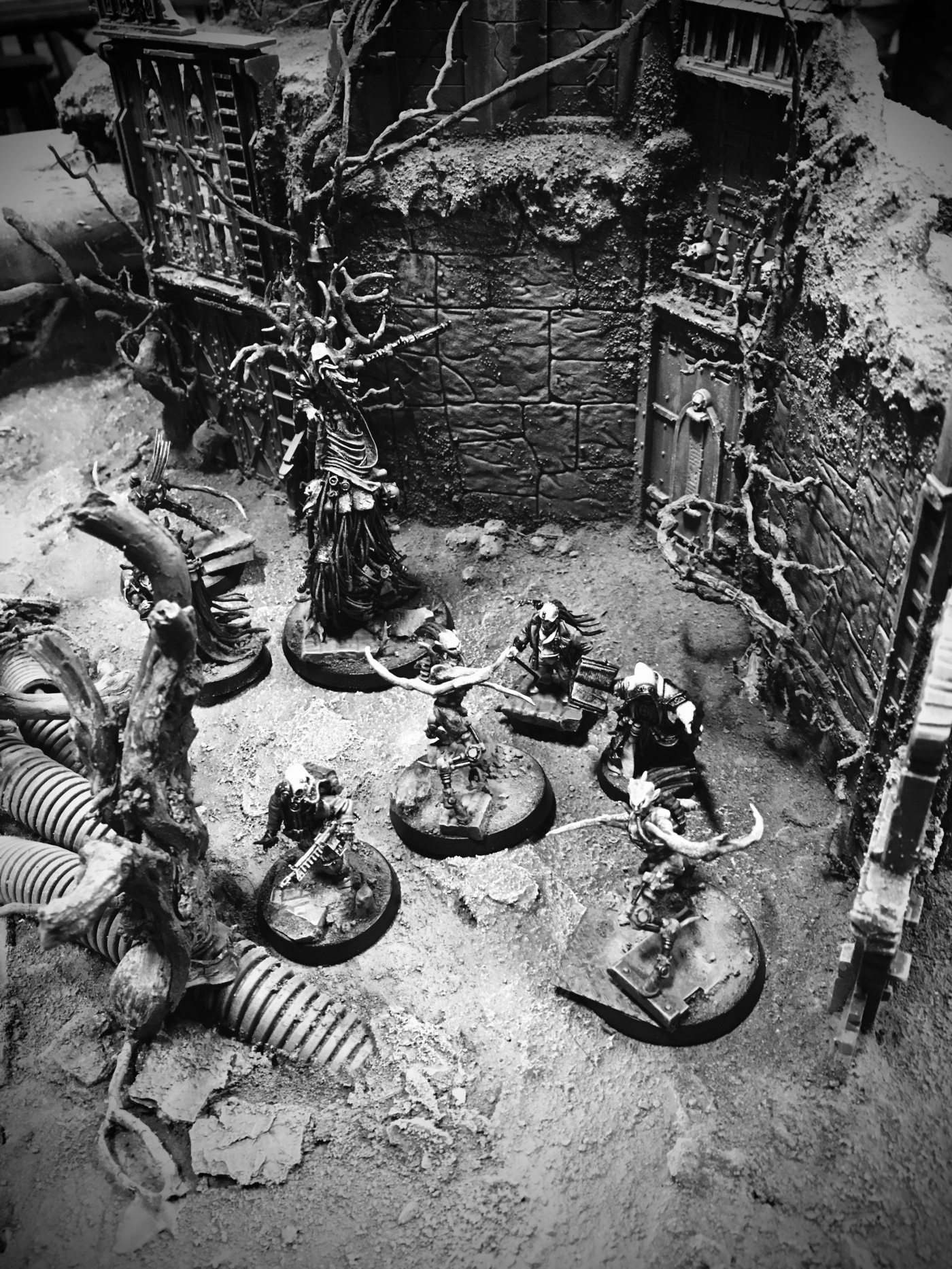 Deep within the Underhive, a fortress laboratory preoccupied with dissecting and preserving pilgrym cadavers has been growing and developing for centuries. It is untouched by Imperial Law, and taboo to even talk about. The Laboratorium Sepulcrum answers to no-one, yet is a central part of Terran life for those unlucky enough to live around it. Part hospital, part commercial entity, even home to a museum, it is largely a freak-show of ‘chirurgeons’ and their experiments.

They are both extremely resourceful and utterly dedicated for their cause.

Lorde Castor Marguardt is the Ædhelinge of the cold and harsh mining world known as Mercina. He is the father of the new born baby – and now also a widow because of her. A mysterious group, with noble credentials and seasoned military assets. Escorting a void capsule towards the chapel, possible containing a human infant.

+ So many high priority targets +

The Church of the Red Atheneum emerge from the crypts, shadowed by haunted beasts.

“Aseneth inflicted her first wound in the Emperor’s name, cleaving off her left hand, and joined the Church (883.M41). This was to be the first of many wounds she administered to herself, such was her fervor in her new faith. Her vast medical knowledge was an unexpected, but welcome, boon to the ever expanding church. Under her auspice, the Church was able to rapidly improve their medical and surgical techniques, dramatically reducing infection and mortality as a result of unsanitary ritual practices.” 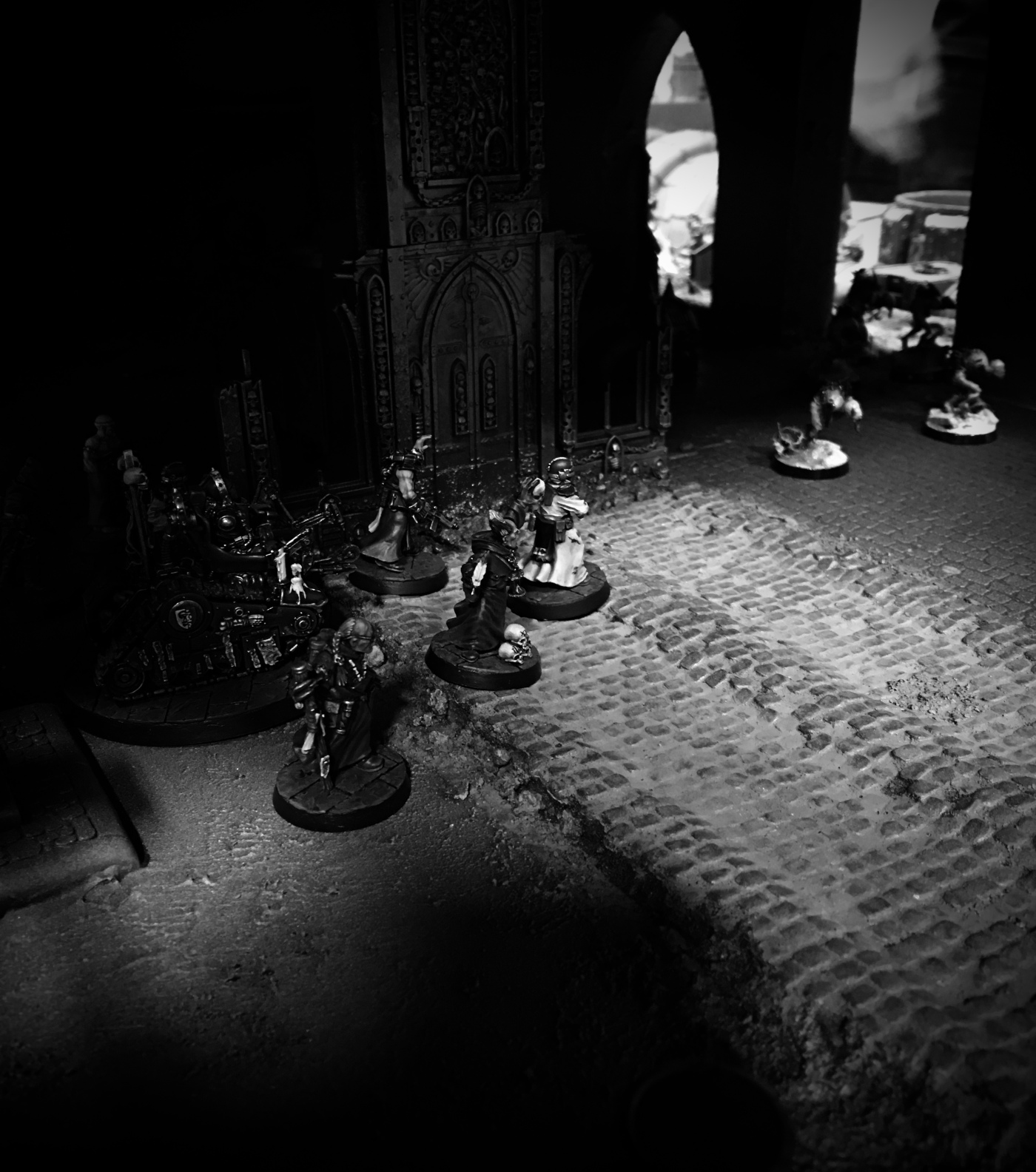 + Each faction moved in, searching for prey +

+ and the pilgrimage begun! + 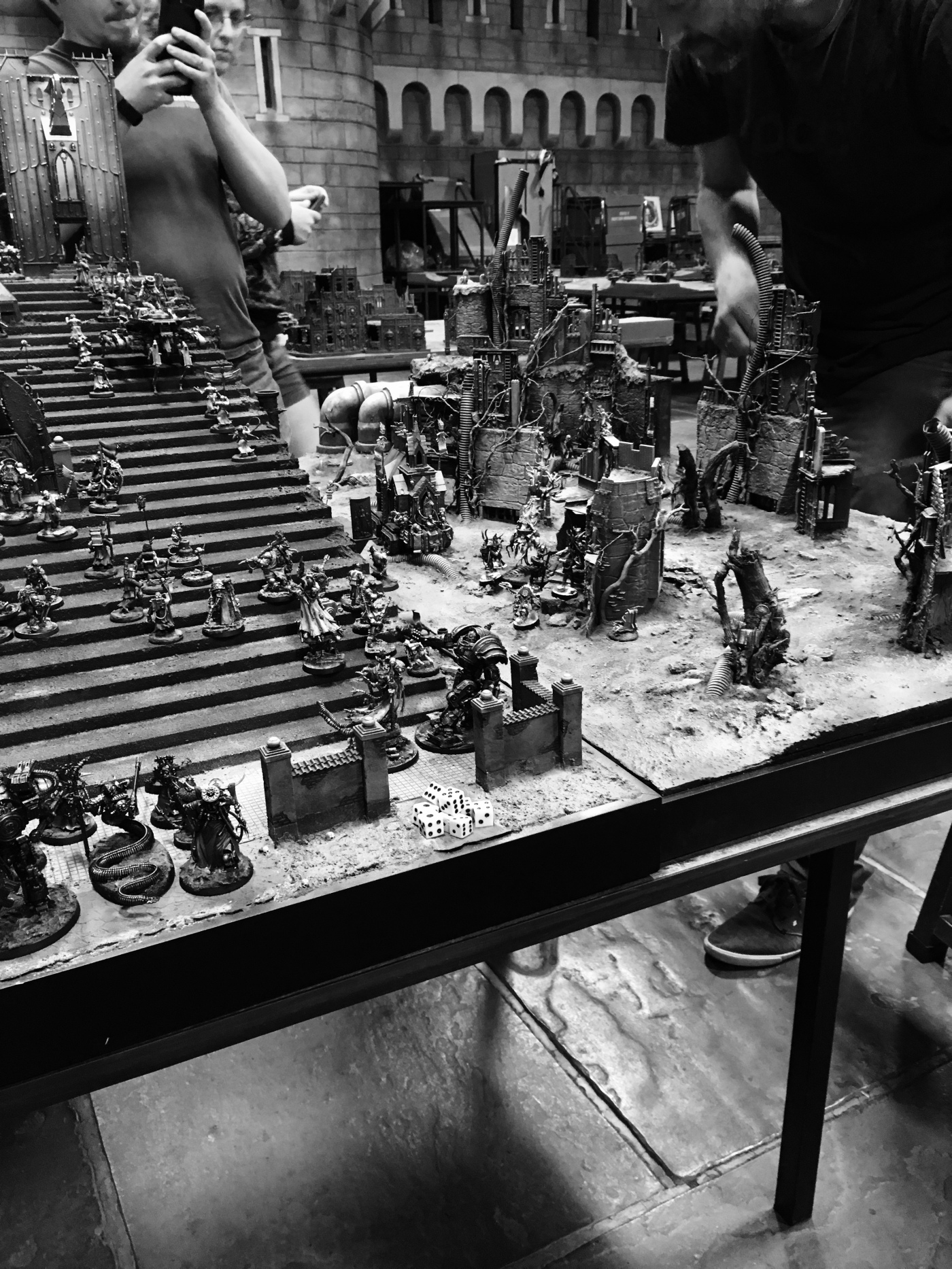 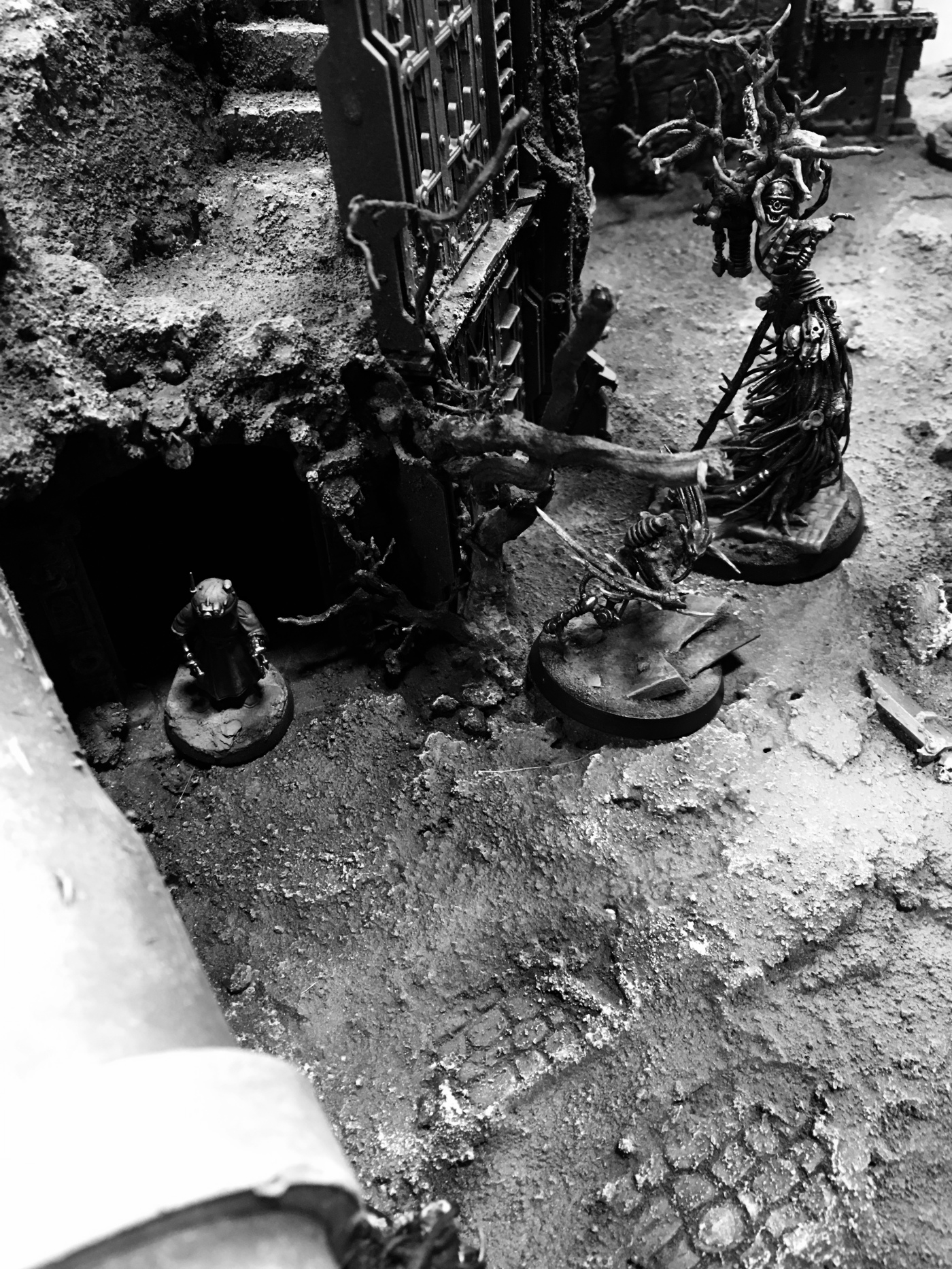 + The Pontifex Maximus, High Cardinal Philippus “the Ageless” ,  starts the call for prayer on this day of days, and eardrum shattering vox system echoes his words, foreign to all but the most educated, to every one within miles of the entrance + 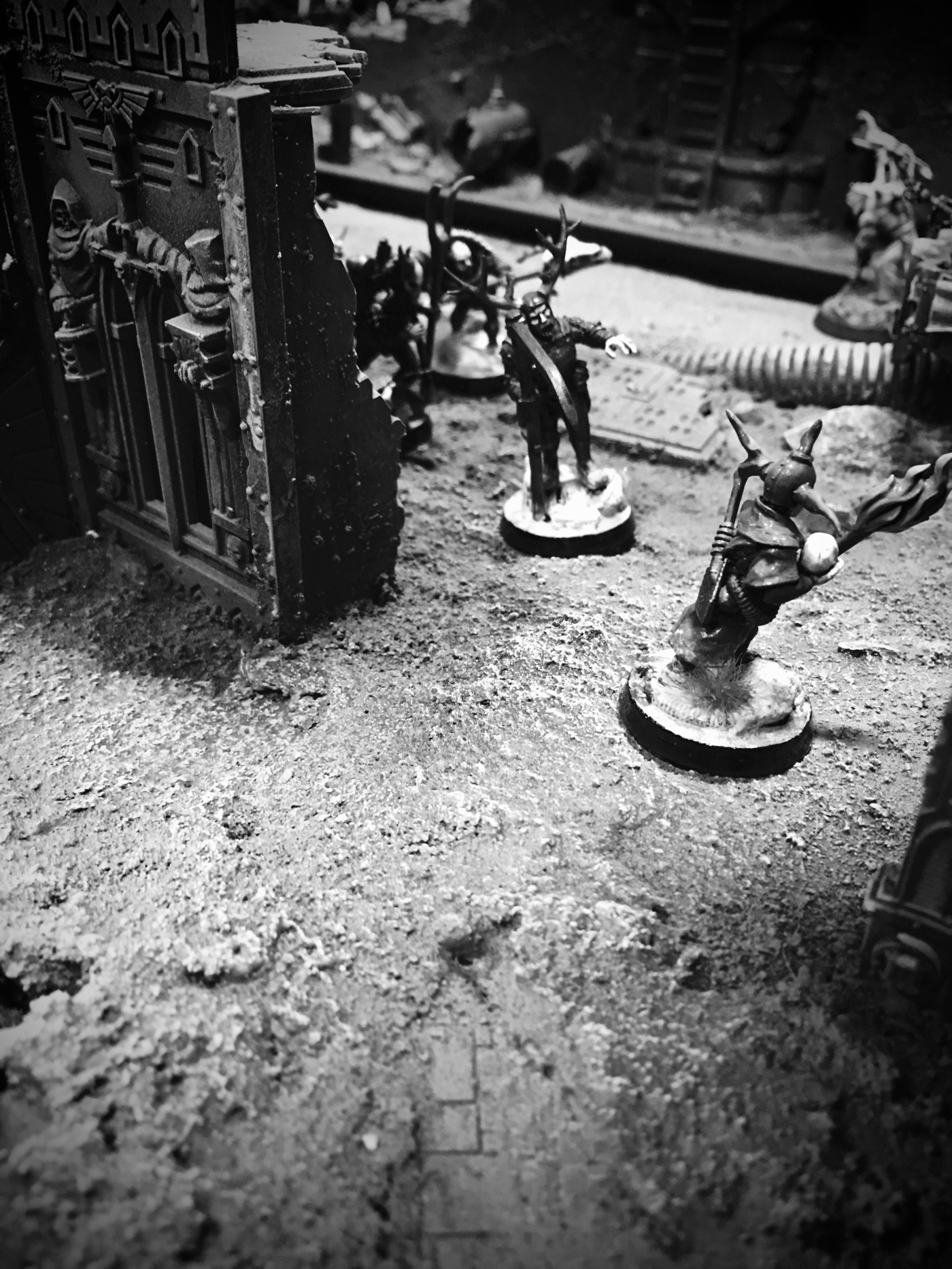 + at the stairs, Pilgryms as varied as the Empire of mankind is vast, ascended to get their savior’s blessing. Here a Tobian Beaconite with his Scalarian Engine travels towards redemption + 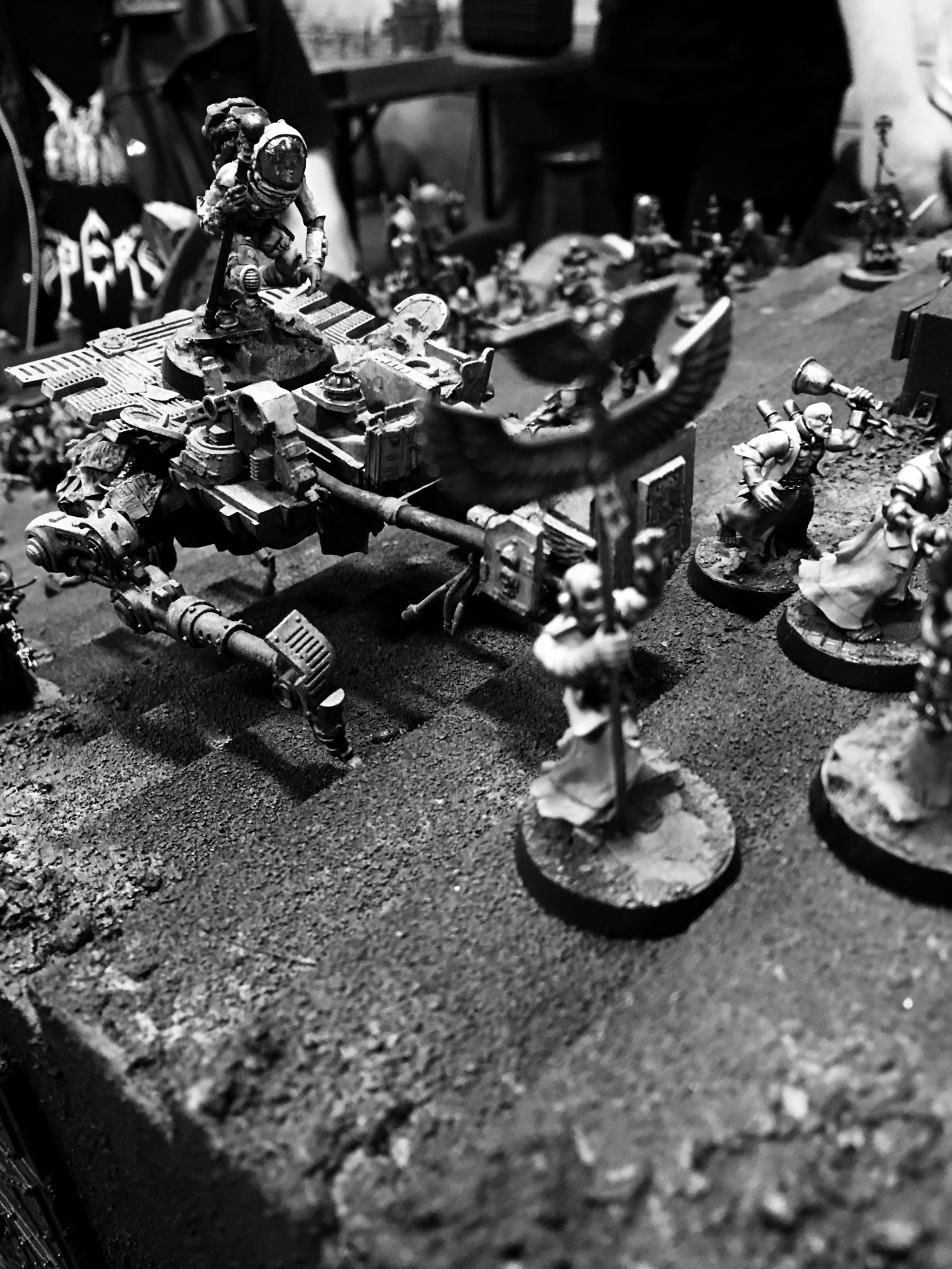 + from the depths of the Botanicarium, its architects emerge and instantly bond with the creatures of Crataegus and the Green Mechanicvm. Forging an alliance +

+ The feth hits the ram, and time for stealth is gone + 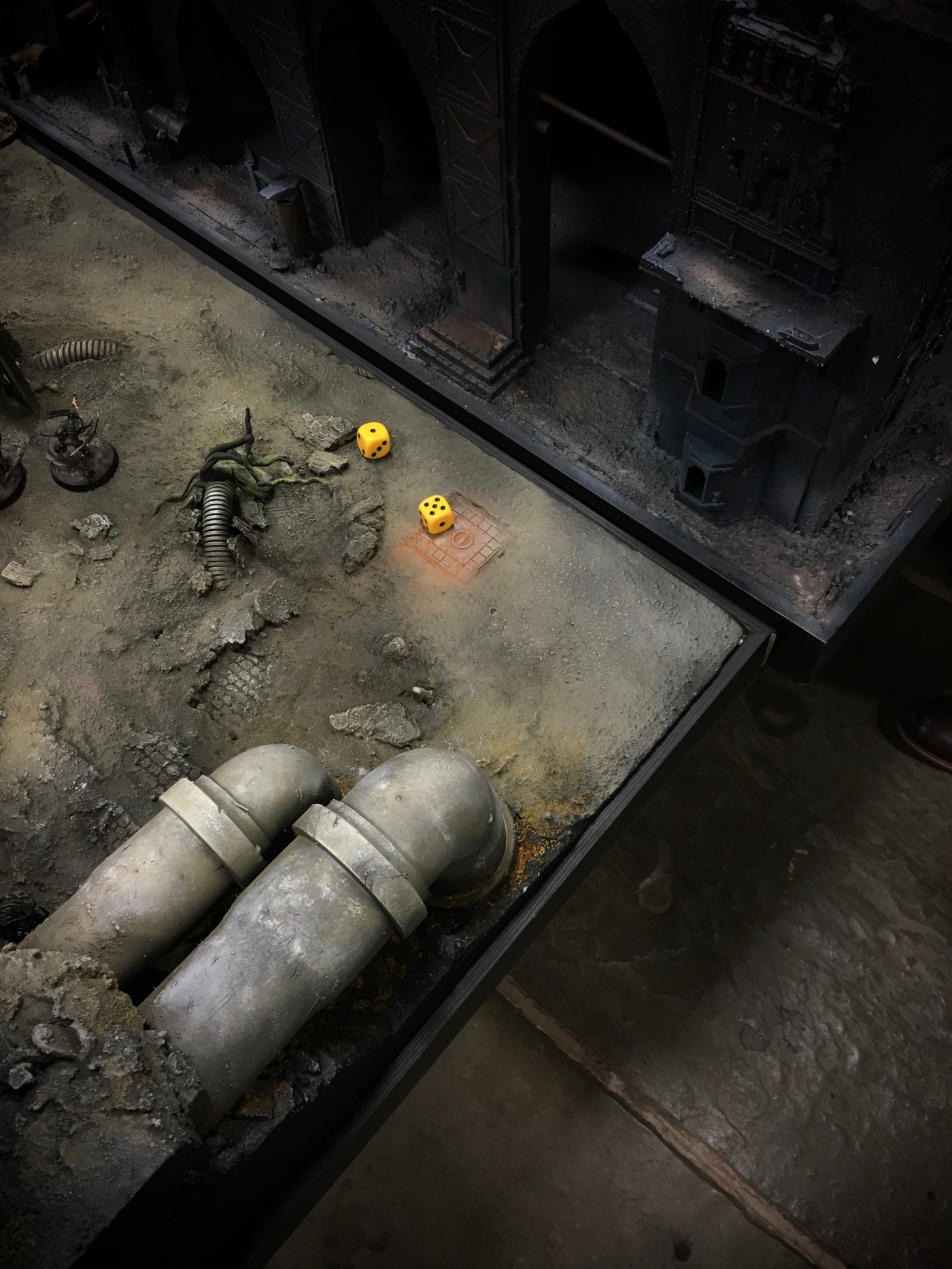 + weapons of exotic manufacture and imperial make alike go off. Inquisitor Lazarus has lost his patience and in the chaos that ensues a dozen pilgryms die instantly and scores are injured. Vogtemanne Jocoff Essell organizes his troops to form a protective barrier so his family can get to safety. The Sentinel of Terra, an ancient giant of the Imperial Fists, recognizes their plight and steps in between the nobles and the raging attack, unleashing his bolter in hammering shots that echo over all other mayhem. +

+ Blind Panic, pilgryms run for their lives, many stumble to death or disability, falling over the giant stairs, blood and carnage… Yet other groups spring to action, innocent pilgryms one moment, revealed assassins, soldiers and agents the next. Their secret war raging in open on this day of days +

+ New factions collide – The Serpent Queen Magos meets the Forgotten Oak, and the chariots of  The Laboratories Sepulcrum! Then proceed to try and direct each other in their respectful styles + 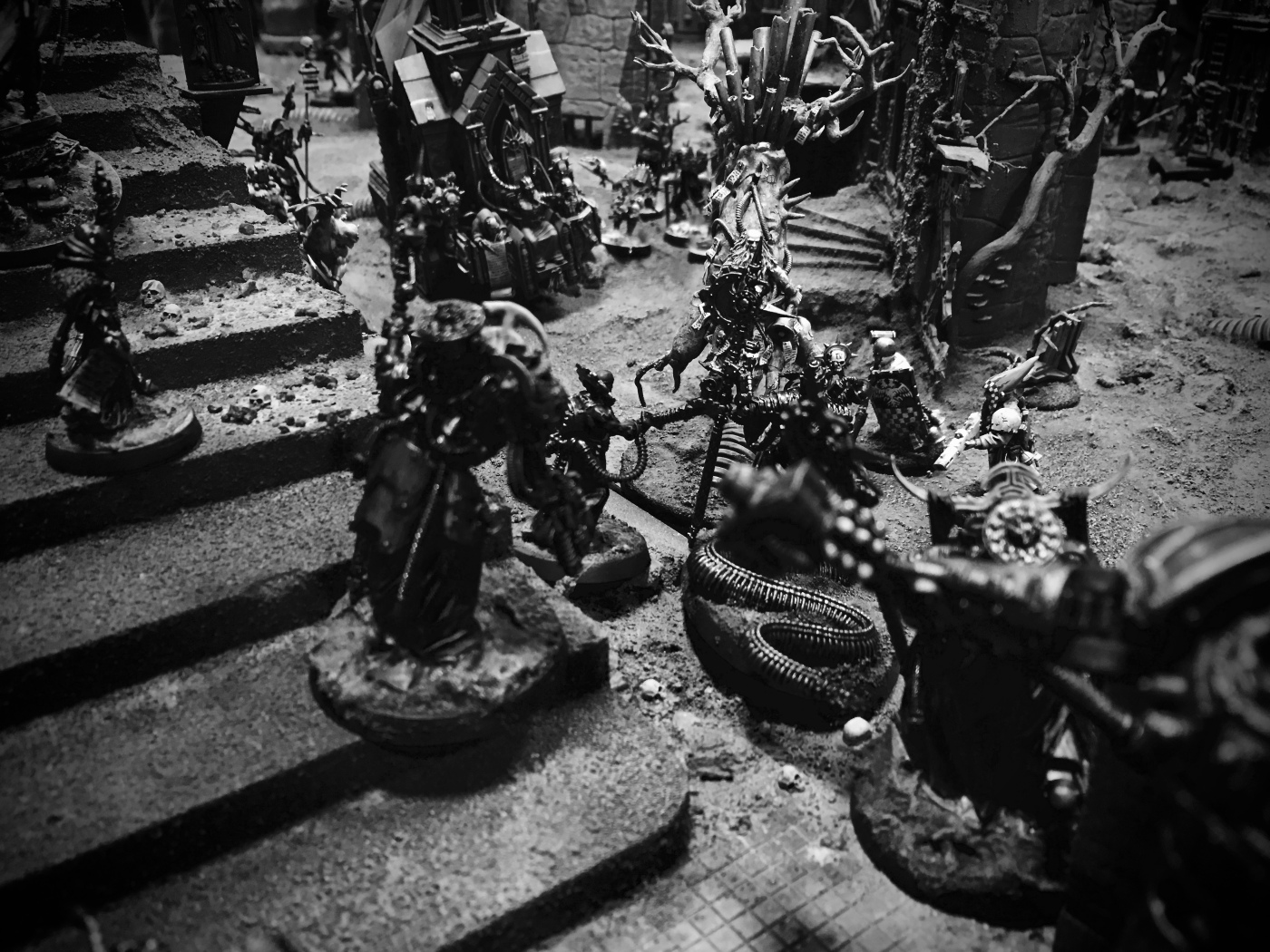 + The Green Mechanicvm employs their new allies, as Machine Stalkers emerge from the heart of the Botanicarium, carrion machines that prowl the ruins like some long lost sea bed home. +

+ Sverre Arrheniusse takes the initiative. Thousands of tendrils of forbidden make embrace the ancient structure as it starts scaling the walls with no apparent difficulty, with his throne guard fluidly in pursuit. +

+ at the stairs a vicious gun fight rages + 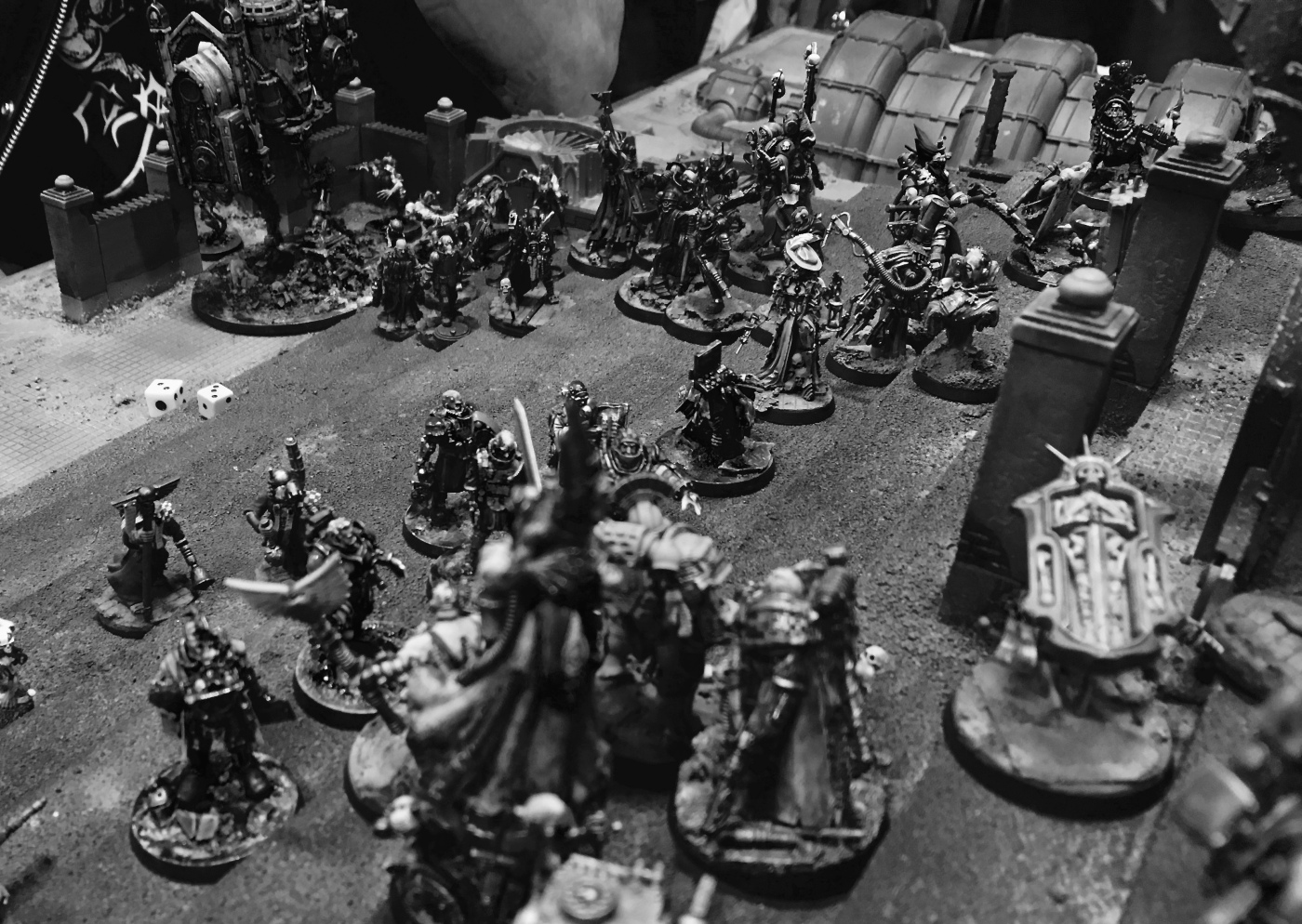 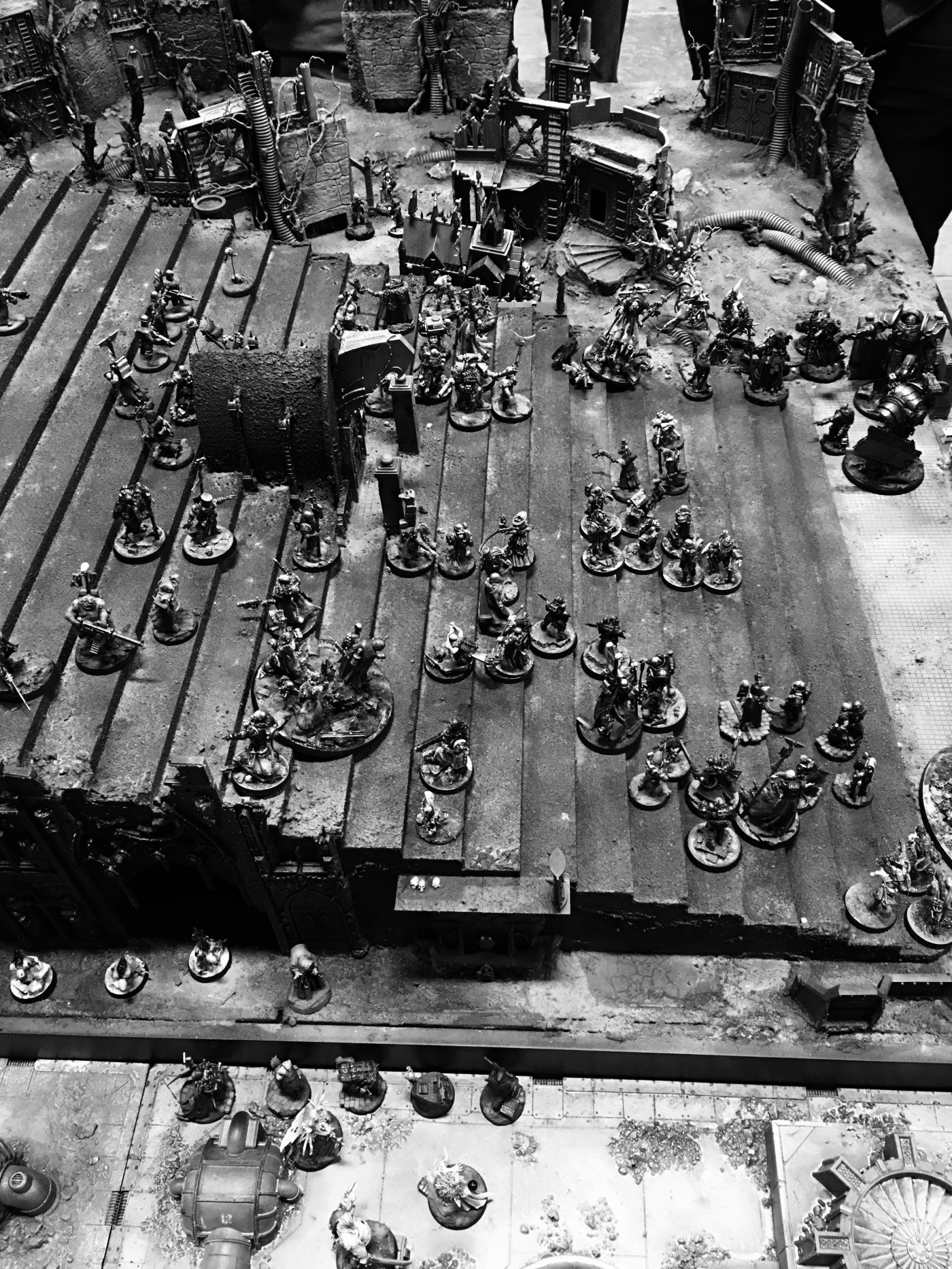 + Yet unseen from the shadows more creatures emerge + 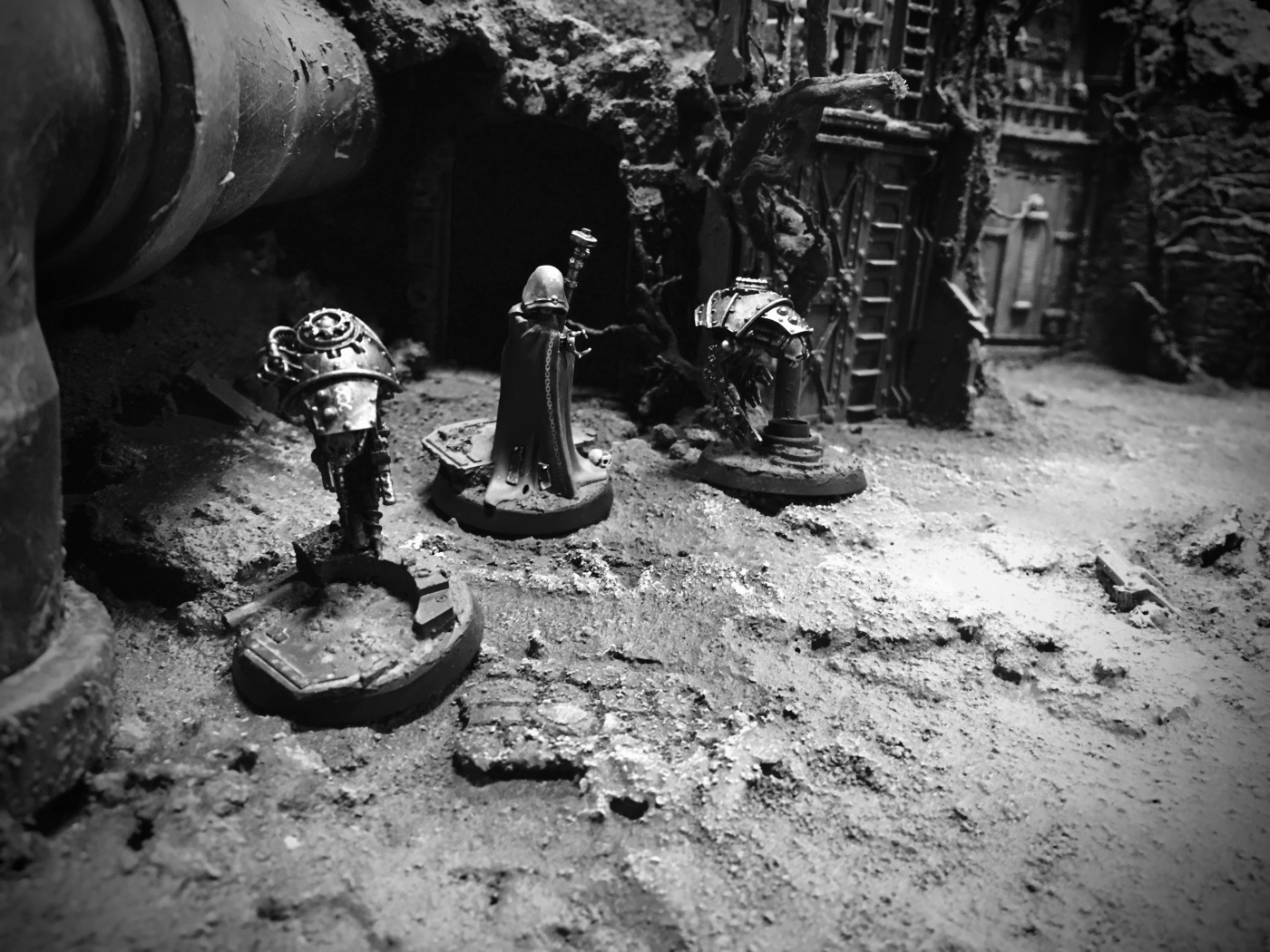 + The Scalarian Engine takes stray rounds and brakes down, risking to slide down the stairs and taking dozens of Pilgryms to very terrible death ground to pulp between it’s mass and the massive stairs +

+ Quercus and Quintus, Herodd’s vicious henchmen push up the stairs, fast and determined! +

+ Vogtemanne and the Sentinel hold the line, while the Milkmaiden and the new born race up towards the safety of the chapel + 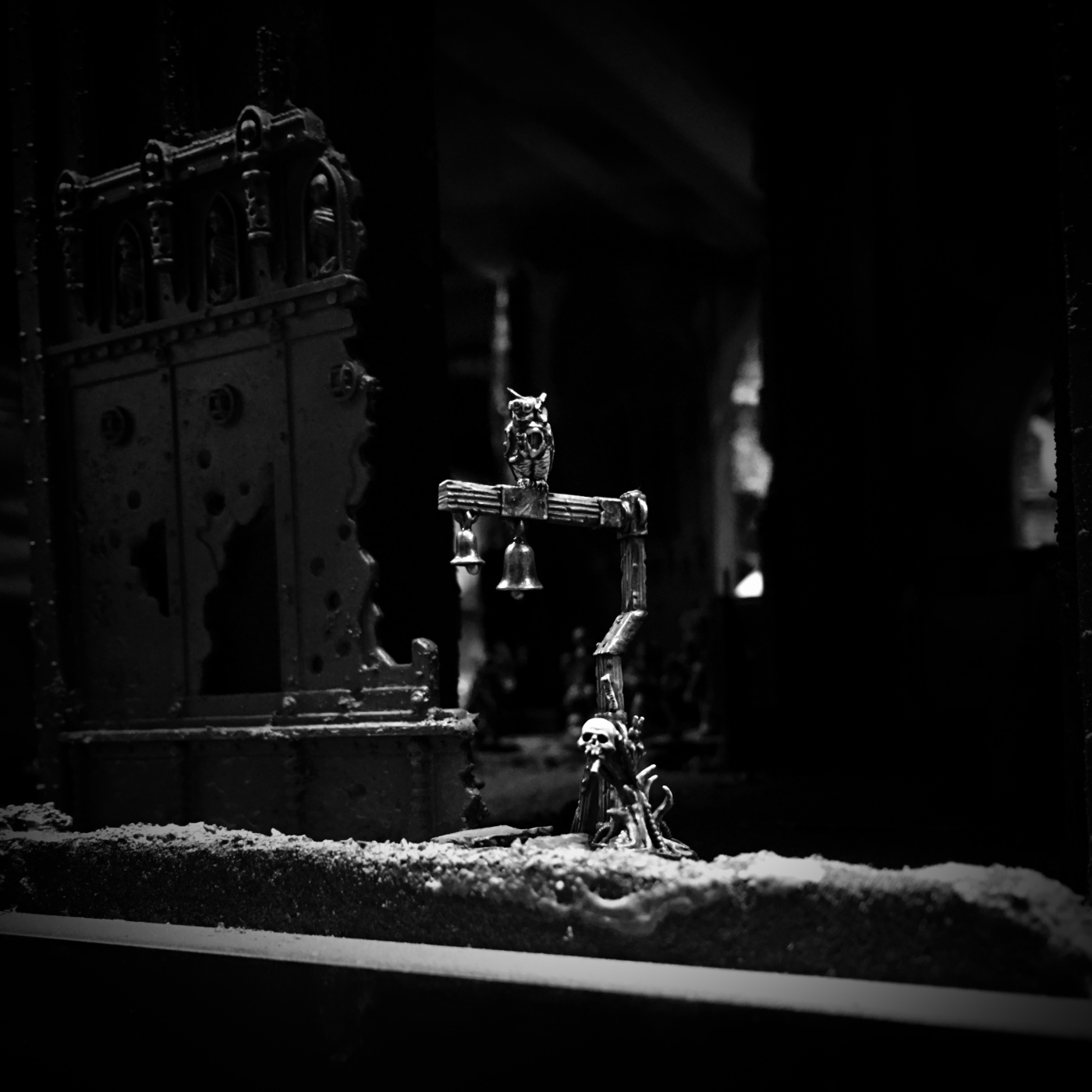 + led by Cardinal Aseneth Levedescu the red church emerges, boldly through forbidden pathways right in the thick of carnage. +

+ The Greatest Thing On Legs, a mobile chapel of lost beauty, the nerves of it’s machine father gone, stomps over helpless Pilgryms as it tries to escape the fighting +

+ The Ordos reveal themselves, the Black ships and the mysterious Ordo Scriptorum  clash.

The Ordo Scriptorum maintains and scrutinises the record keeping of the entire Imperium from the present and going back to its inception, prior to the Horus Heresy and the Great Crusade. +

+ amongst the thousands of Pilgryms on the stairs on the day of days, we have not only the trained forces heavy in intention, but also opportunistic psychopaths, fortune seers, and machine things sucked in by the drama and action +

+ Ordo Scriptorium group, trying to secure their invaluable findings are attacked by the terrible crypt demons, their gory maws wet with sanctioned blood + 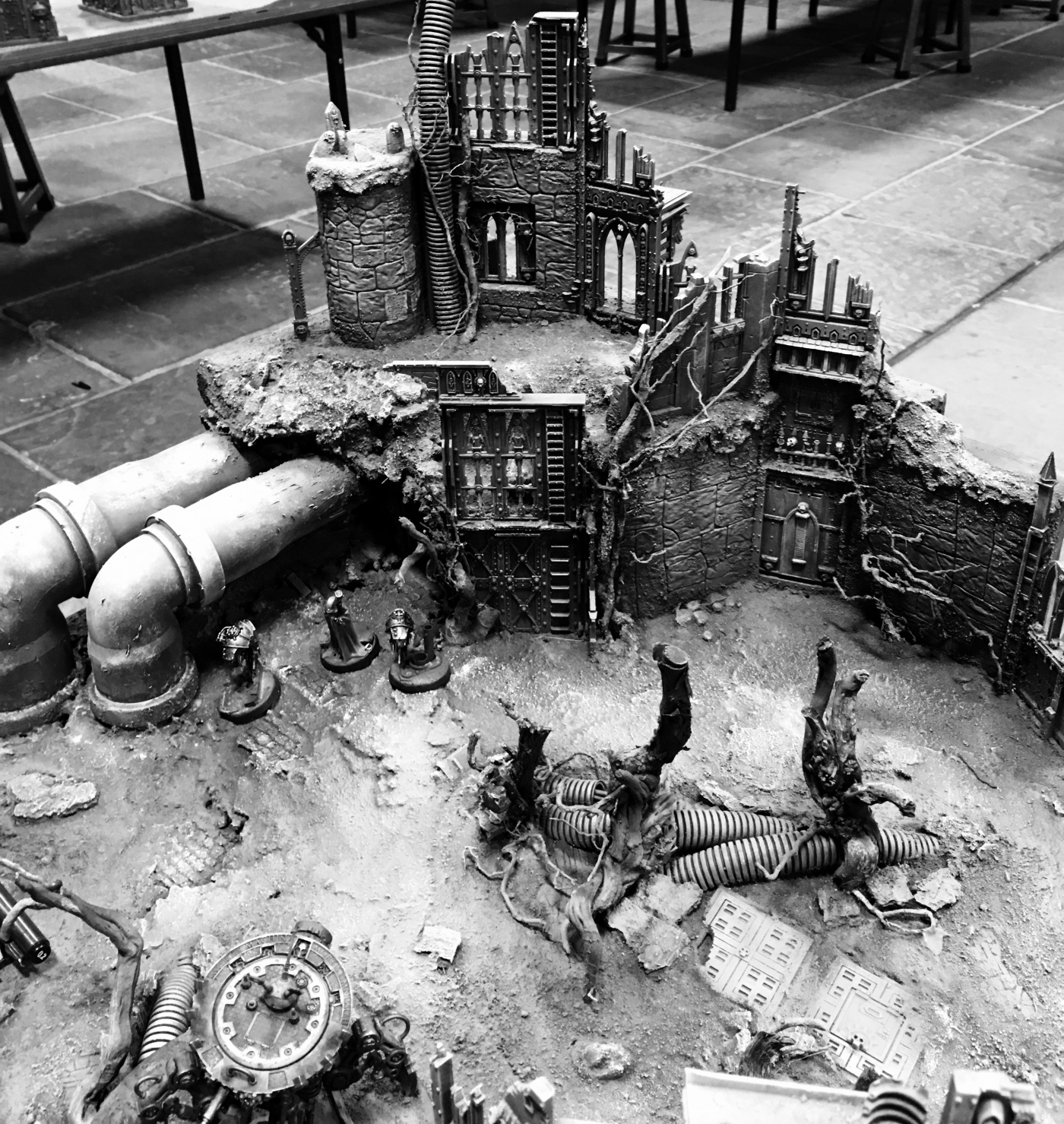 + From the Aquila Doors of the Chapel, Lord Inquisitor Pelagius strides to battle flanked by his warriors. Pelagius, one of the mythical Sigillites, has but one goal. To make sure the Ghost legion doesn’t find the pilgrym + 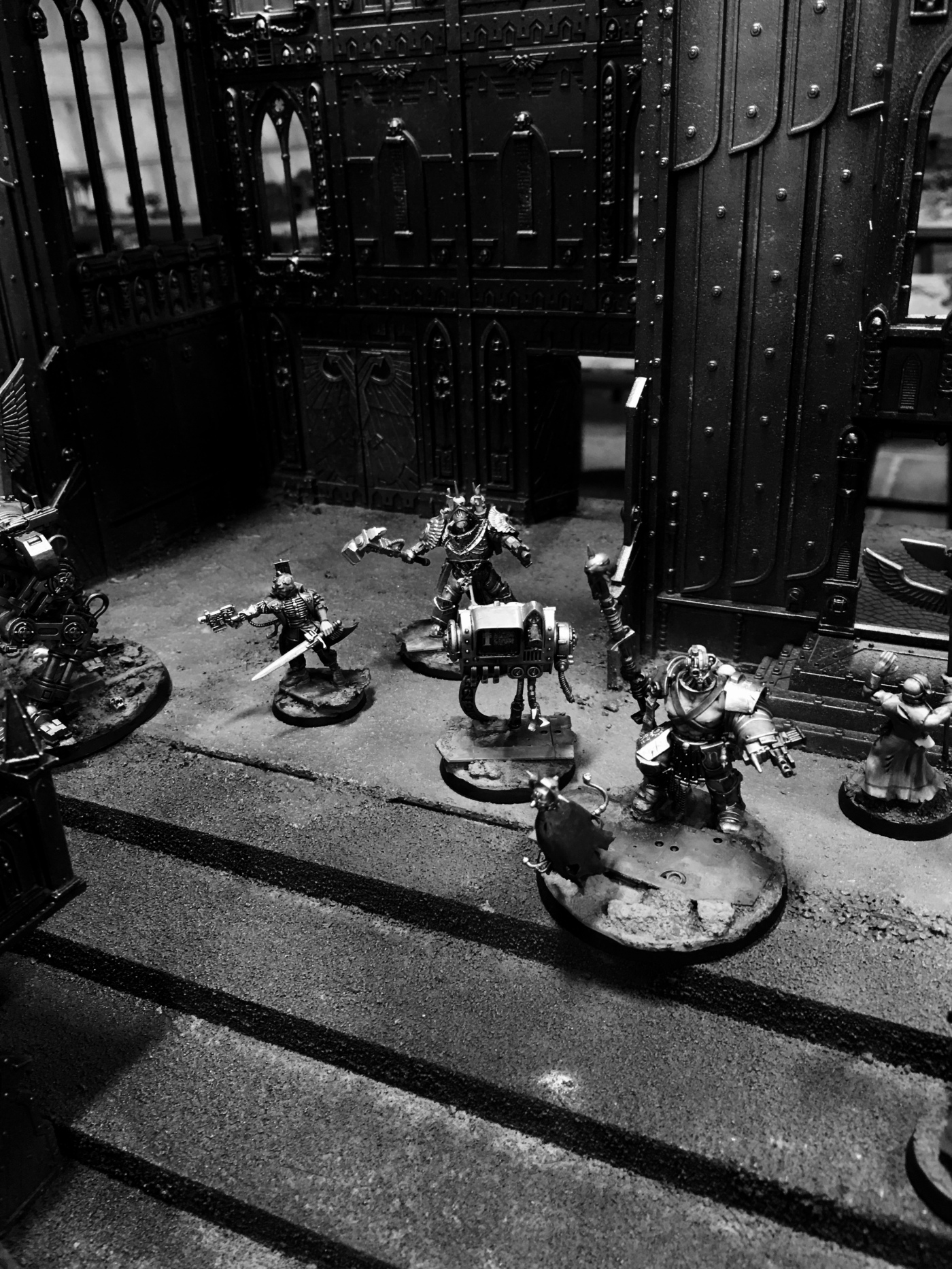 + on the Day of Days, even the measuring techno-arcana is of exquisite make +

+ Some have foreseen the coming of P +

+ The Organ tree lies shattered, and the corpse cart ploughs in to pilgryms, the sickening Exanimus Chem-Draugs ripping apart what escapes its tracks. +

+ The Mechanicus however, came prepared, and their Monstrous Battle Automatons step forward and engage +

+ The Noble Family, who travelled the stars to name their new born at the Daylight Chapel, make their way up, protected by the Chapel Curze Guard, and the massive house brute, They call him “Adsum” – he who is present, here and now. + 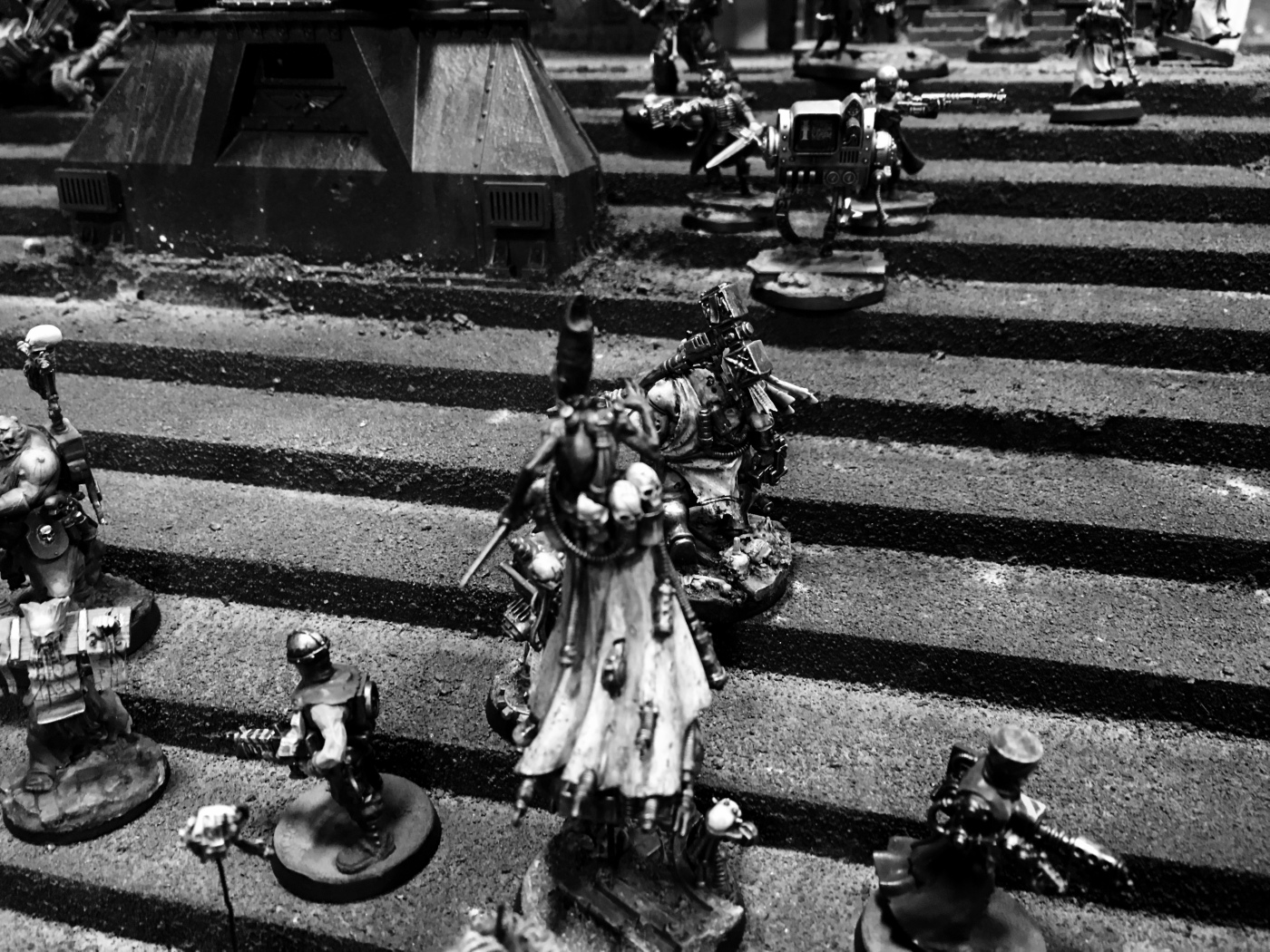 + and in the silence of the Botanicarium, the Ghosts appear + 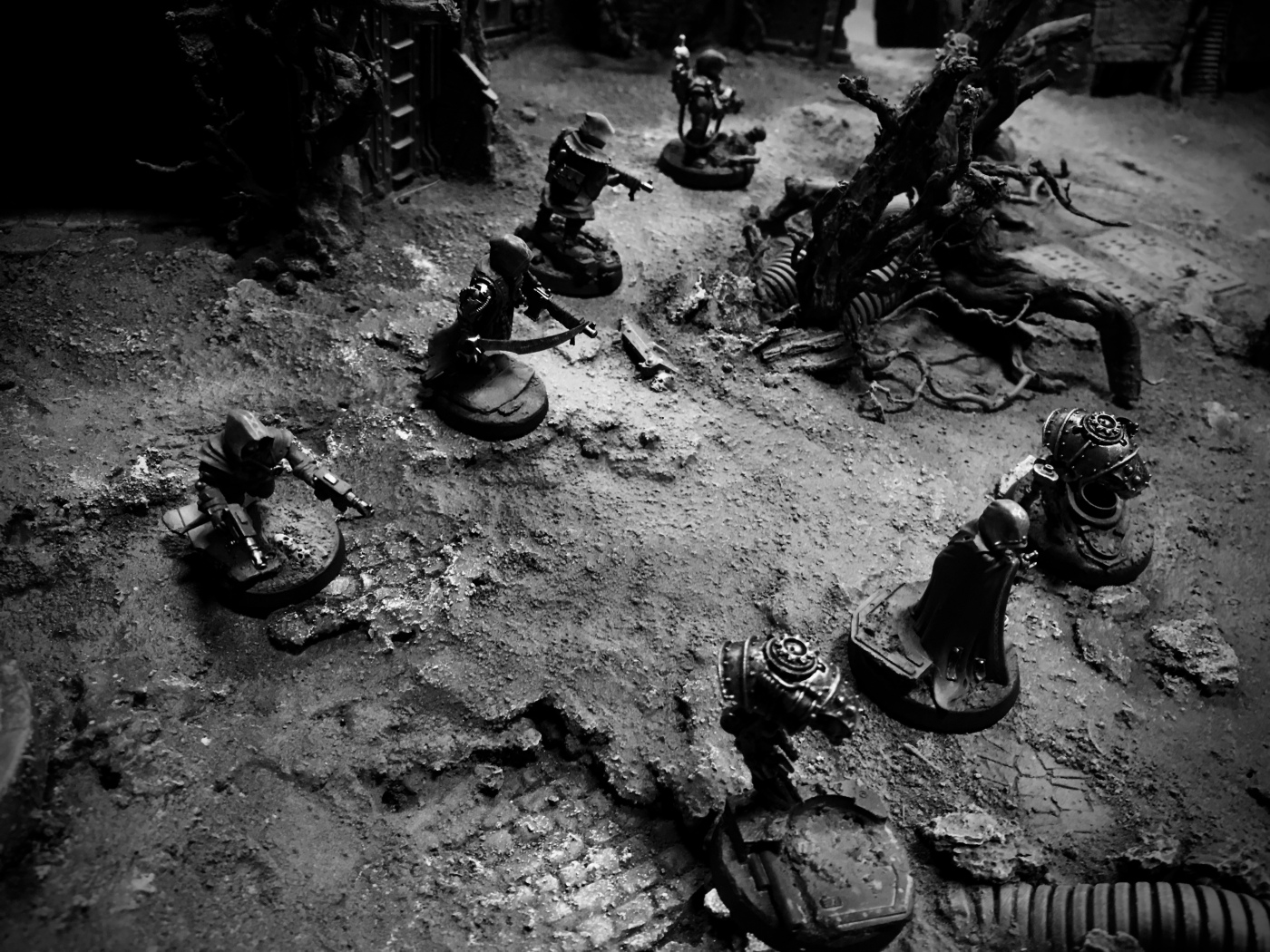 + The Sentinel has made his way up to look after the new born, Astartes instincts recognizing the young ones importance through void shields and mass of bodies. With the Blazing Angel of war gone, the Red Church attacks the worn out Vogtemanne +

+ anywhere you look, the area is full of wonder and war. This is the beasti tracker and it’s handler, both employed by Lord Lenton to find the Pilgrym + 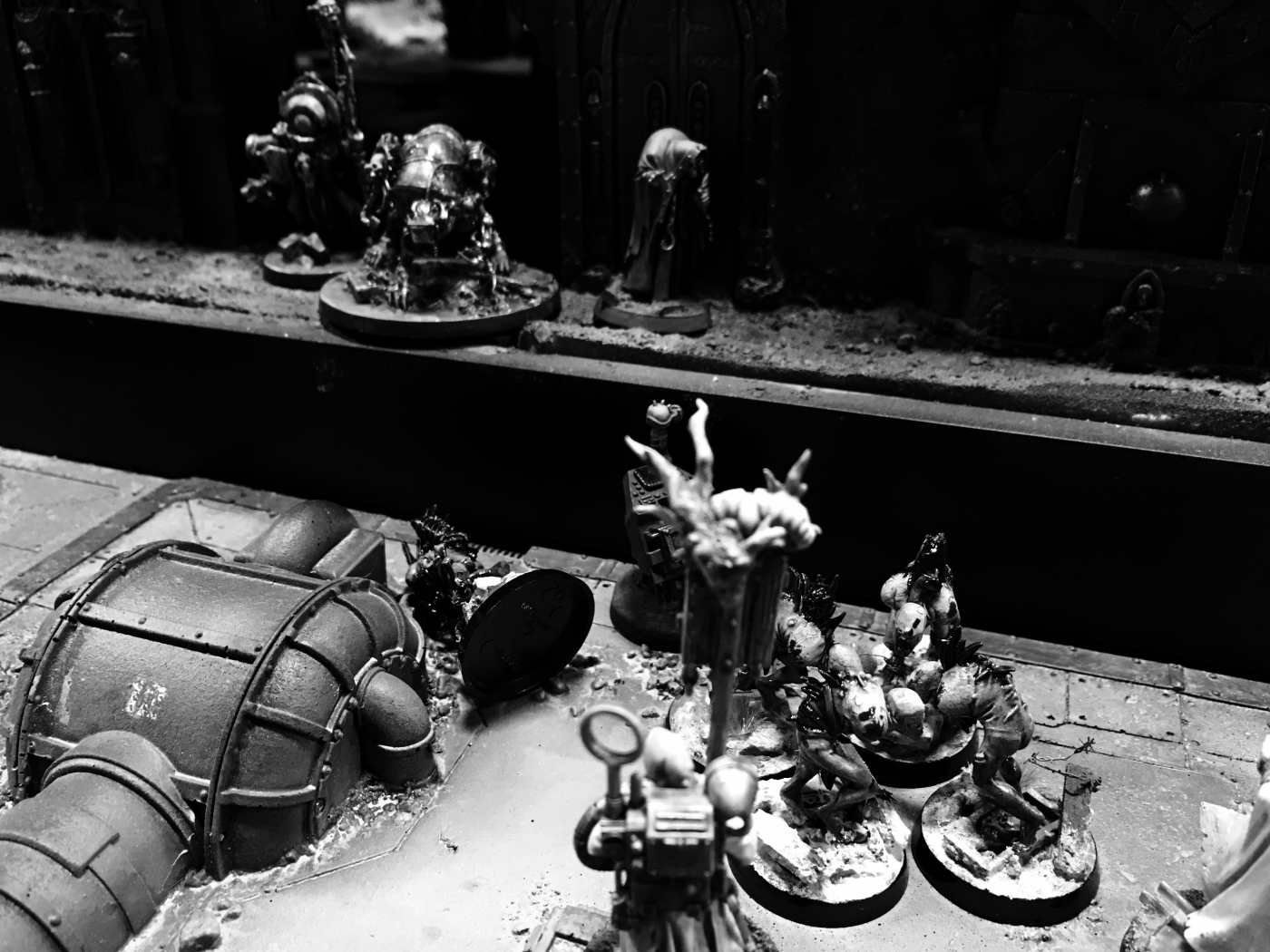 + Some wicked maternal instinct, sixth sense, or sheer luck has allowed the massively tall, slender and fragile Imettaja to get up the stairs. Danger is imminent, as if a big black shadow is running up the stairs faster than anyone can scale them +

+ That shadow is the void created by the terrible null constructs in Lazarus’s retinue. The Veteran Inquisitor, through a combination of massive intelligence gathering, his experience and forbidden arts, has decided the Pilgrym or it’s essence must be in the Void capsule, for that is the only thing hidden of his “sight” +

+ Behind the Thorn Guard, the first Crab Stalker has made the impossible climb and attacks any living creature at sight, Adsum has met his match and is pulverized in sustained heavy stubbed fire + 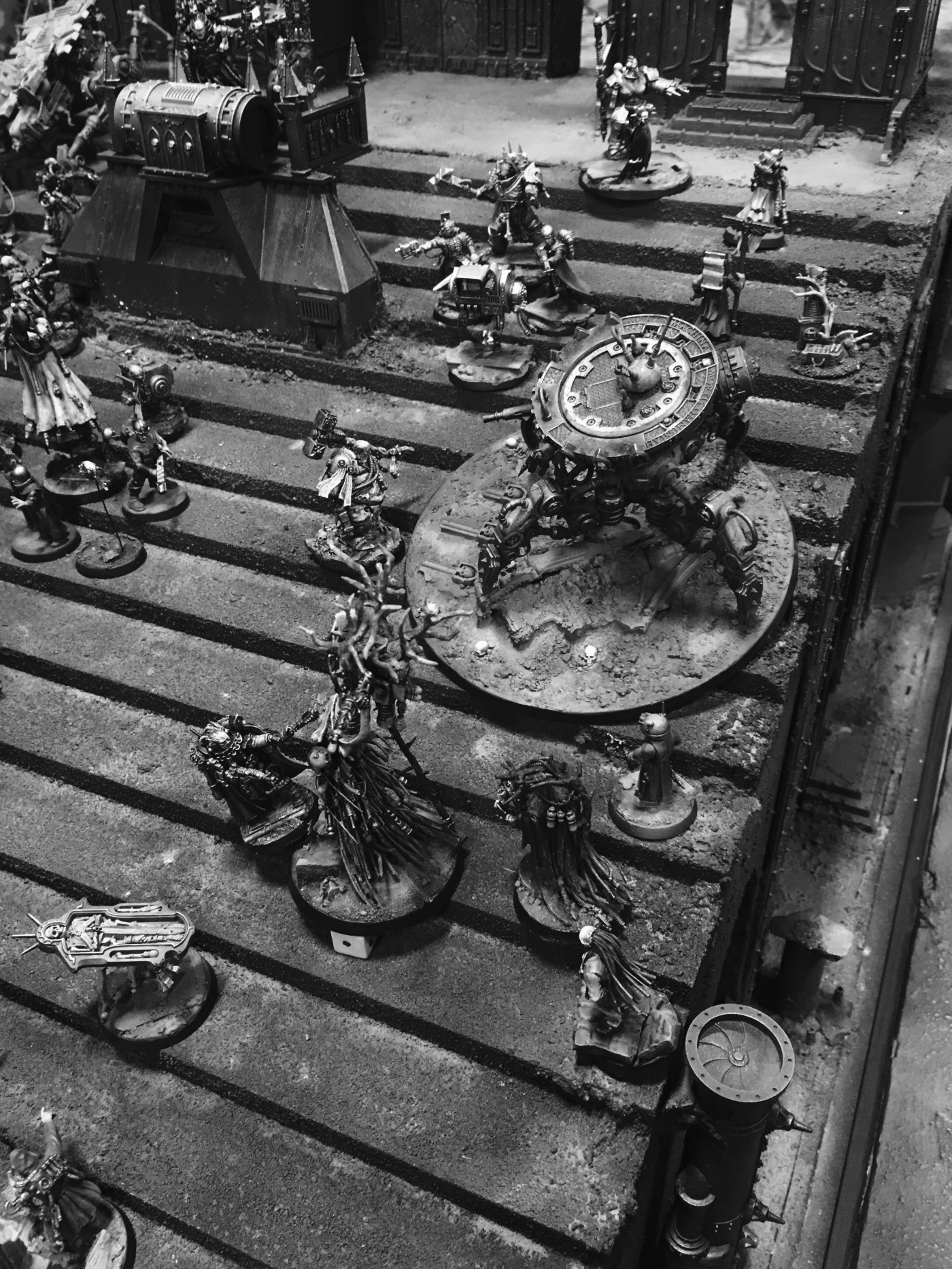 + And a second warrior god enters fray, as a chapel side door explodes off it’s hinges and Alpharius arrives + 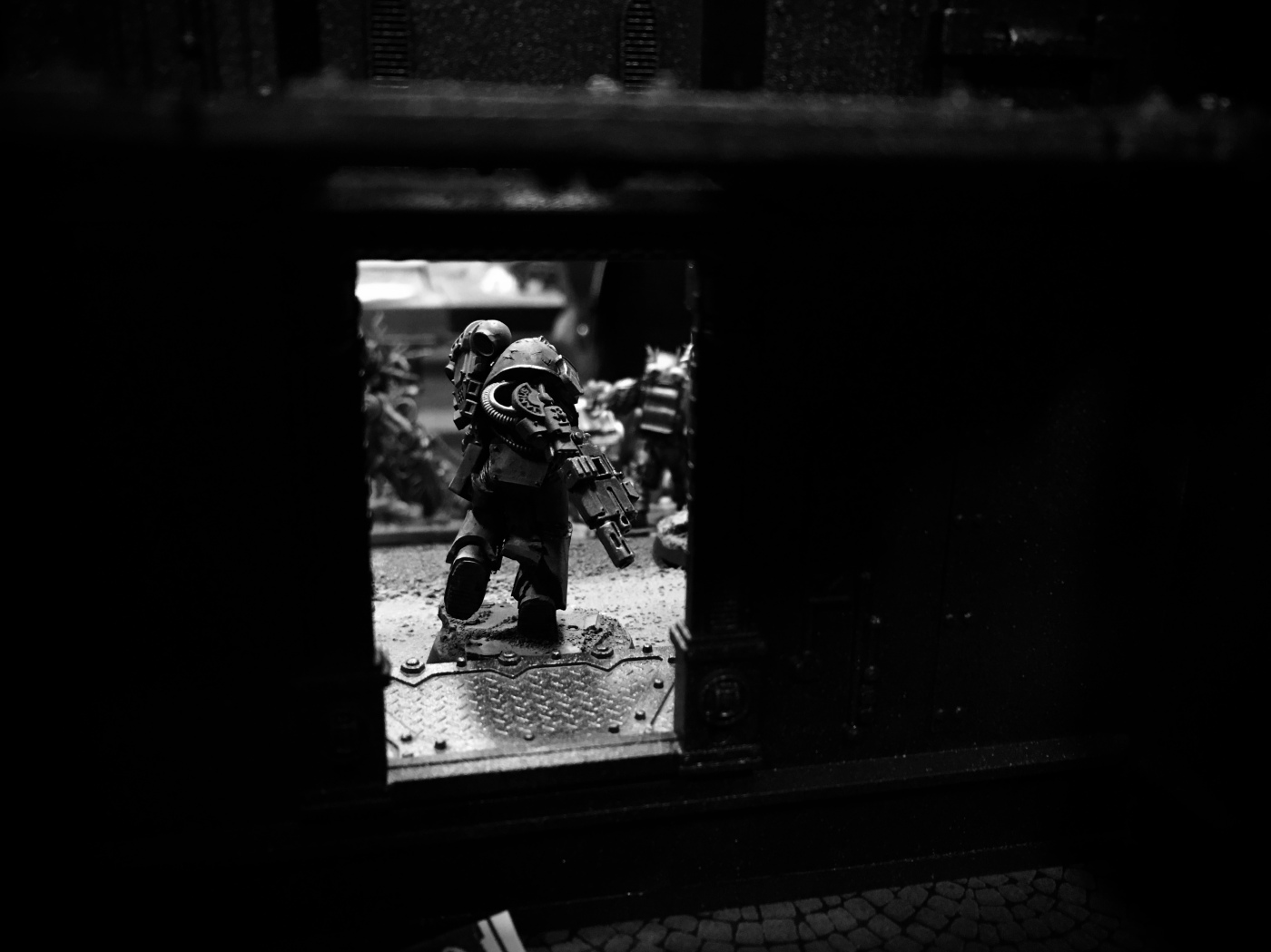 + Pelagius’s henchmen buy him time to recover from the ambush. Alpharius kills them in seconds, but this is enough time for the Lord Inquisitor to activate his displacer field and the Exalted, his legendary thunder hammer that shines like a miniature sun. +

+ Iron within, Iron without, Green Mechanicvm splinters as the Battle Automaton demonstrates its incredible strength. +

Then the black shadow of Inquisitorial death catches the Imettaja. With her last breath, she defiantly deactivates the void shield, and releases the jolting shockwave of primordial power that is the Pilgrym – all too familiar to her in life, she dies relieved. +

+ Several of the null constructs explode, but if there ever was an organization capable of containing the power of the newborn Pilgrym, it would be the black ships. Through incredible force of will and several more Pariah lives, Lazarus manages to re-activate the shielding and then sends out a single call sign. – – – – -. 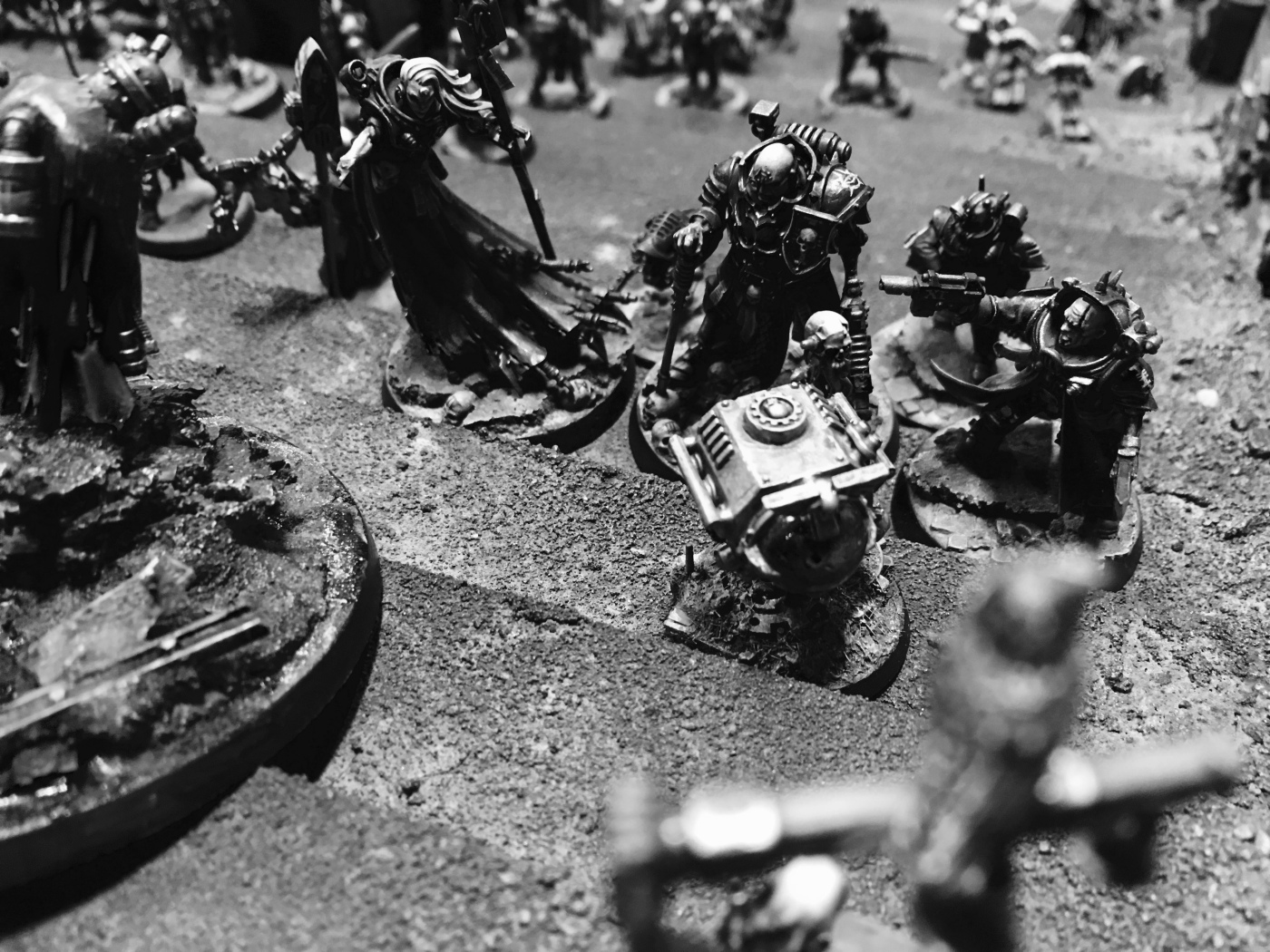 + Darkness descends from the heaves, and a whirlwind of electric blue filaments wraps around Lazarus and his remaining retinue – and then they are gone – only scorched shadows where they once stood left behind from the horrific teleporter

Lazarus has dreamed of this day, been haunted by it’s whispers, nearly driven mad by the life long quest to capture such a being. He is now the king maker. And none shall stand on his way +

+ The Day of Days ends with Gods at war – The Huge shining Sentinel and the Giant Ghost smite each other in a super human spectacle.

From the lighting and the tempest,

Our Emperor, deliver us.

From plague, temptation and war,

From the scourge of the Kraken,

Our Emperor, deliver us.

From the blasphemy of the Fallen,

From the begetting of daemons,

From the curse of the mutant,

Lord Pelagius’s mind recites as he hits at the very instant when Alpharius delivers the killing blow to Imperial Fist. The venerable Inquisitor, a Sigillite, another product of the Black Ships, brings his formidable physic powers into the heart of the sun that is his hammer and hits the Ghost in the back.

And only silence and darkness survives +