The final two, absolutely amazing Invitational entries than more than make up for their late delivery. First one is from PDH, a weapons team symbolic of his incredibly detailed, tasteful and reserved style.

I started off with the Invitational with the idea of simply wanting to continue the army (ha ha)/Inquisitor NPC’s that I have been building for a while. So there was a merc, a skitarii and a “weapons team”. I also made a little gun dog to go on the base of the Skitarii to represent a boltgun. The group were ok but something was a little off for the Invitational. I only realised what was off when taking the black and white photograph – I had two models of similar stature, who both should have been on 25mm bases. So in the spirit of the Invitational I removed the merc* from the line up as he didn’t really fit with the Mechanicum theme and found a gorka morka base for the gun dog. Now I have three models of different stature and movement.

Painting has gone well now that I have gotten used to my new glasses (yep really bad timing). I’m really happy with the paint job, especially the skitarii’s face and shoulder pads, the free hand stripes and cog symbols were fun to do and really make the mini so much more interesting. Surprisingly I think pink/purple bionic lenses work really well on these grey models and complement the green lenses rather nicely.

Thanks guys. You have really made a brilliant start to your shared blog and its getting better and better. 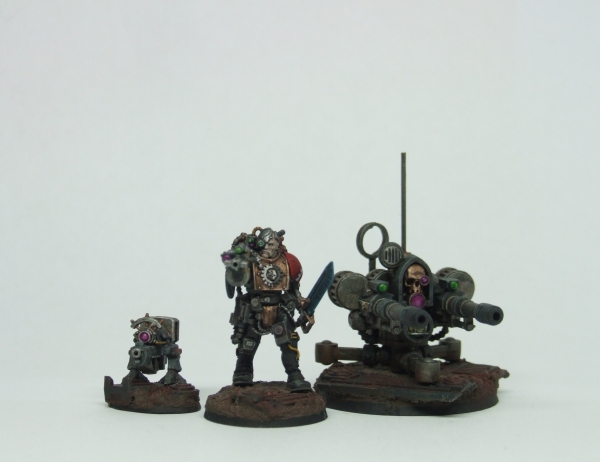