The Masked King knows no fear.

His is the kingdom of fear.

He has the face and physique of a lion. An Alpha beast cloaked in a veil of alien darkness, artificer armor with chameoline skin that can render him almost invisible. He is regal and terrifying, a Master of Man, an Angel of Death. His mind is brilliant, sharp as a serpent. Ancient he is, perhaps as old as the stars, yet the fire of life burns brighter in him than any being I’ve previously met.

His father’s father built him to create an imperium and that’s what he has done. We are his soldiers now. Soldiers of Darkness.

A Fraternity of Fear. 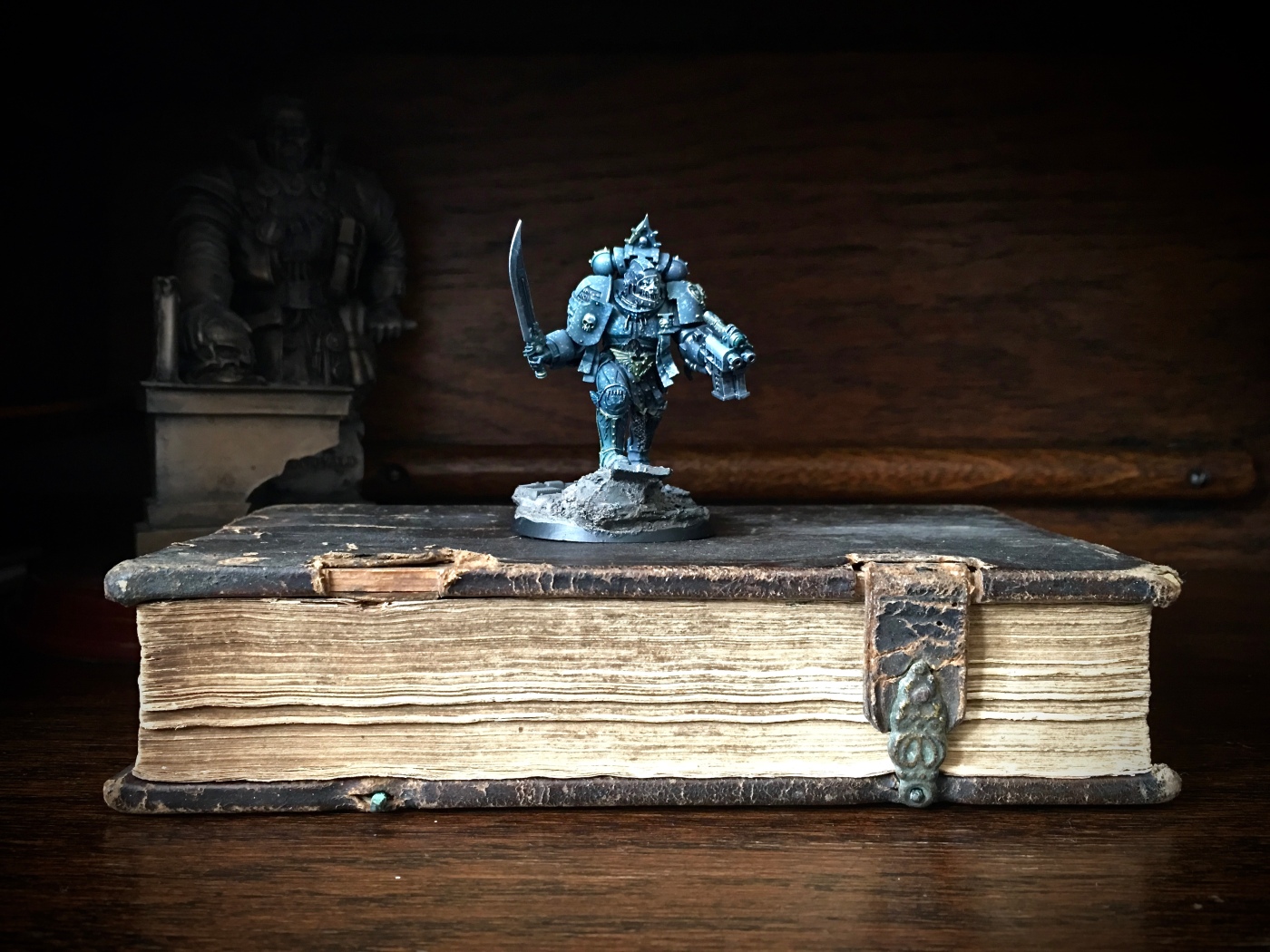 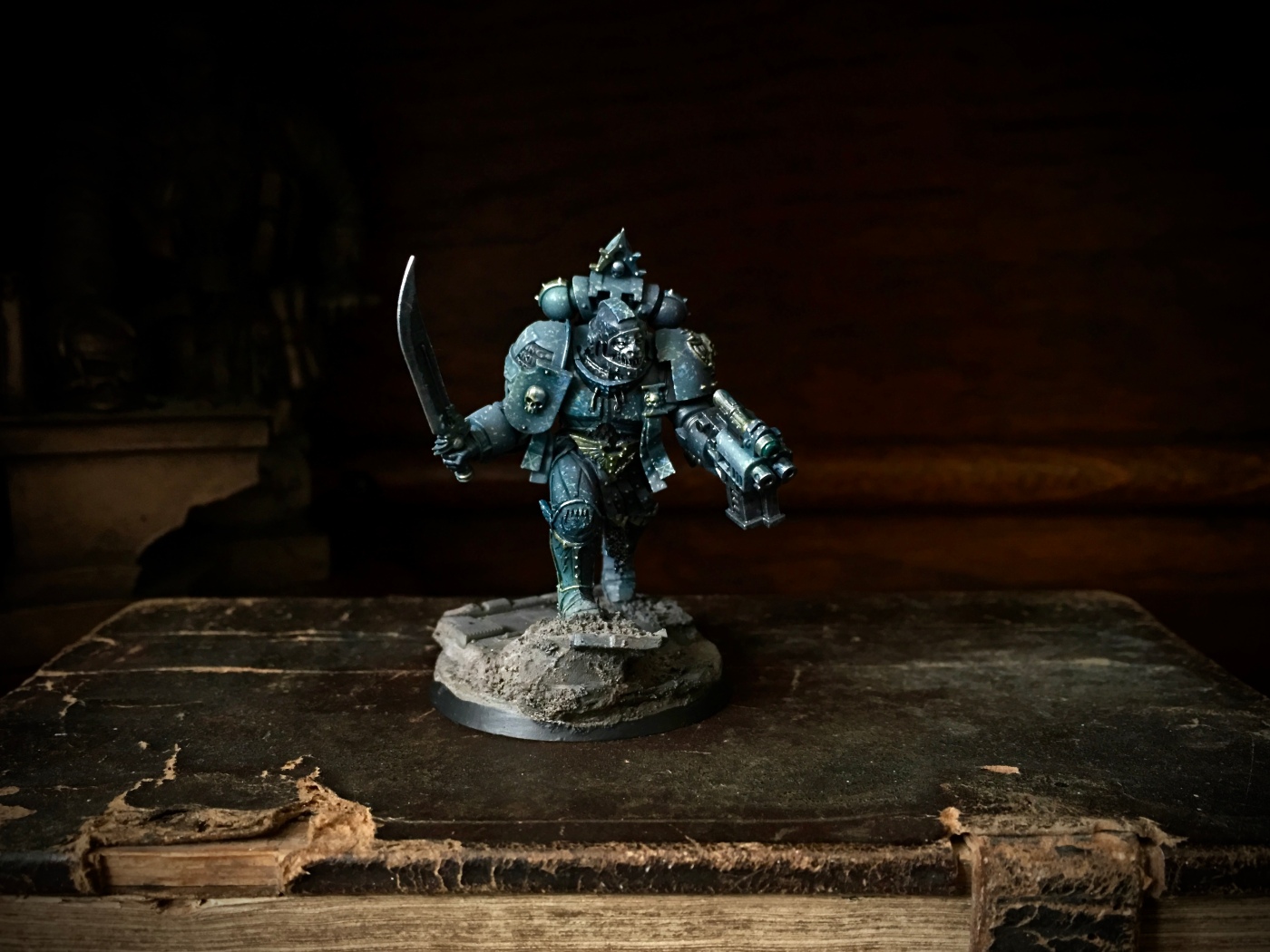 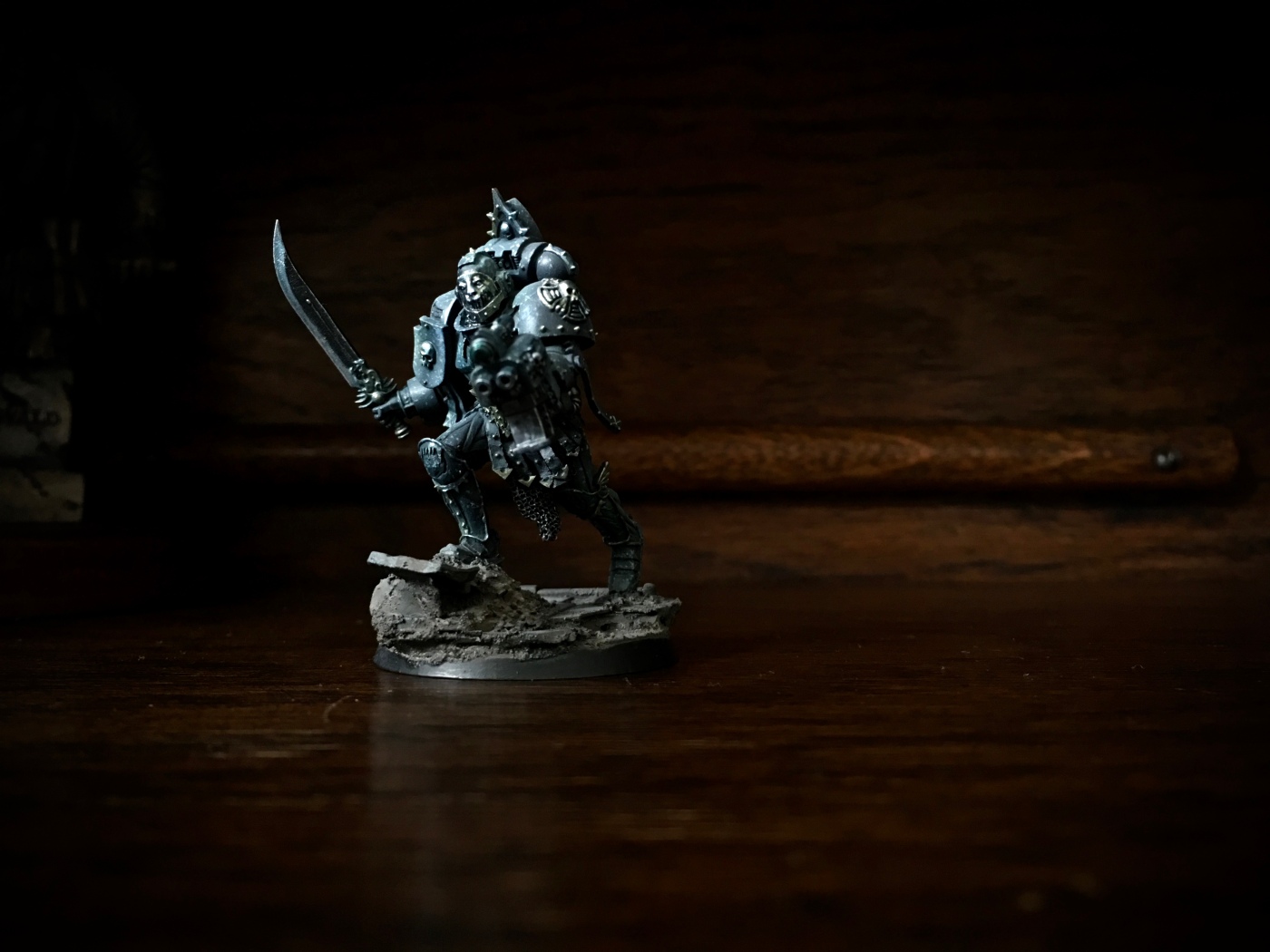 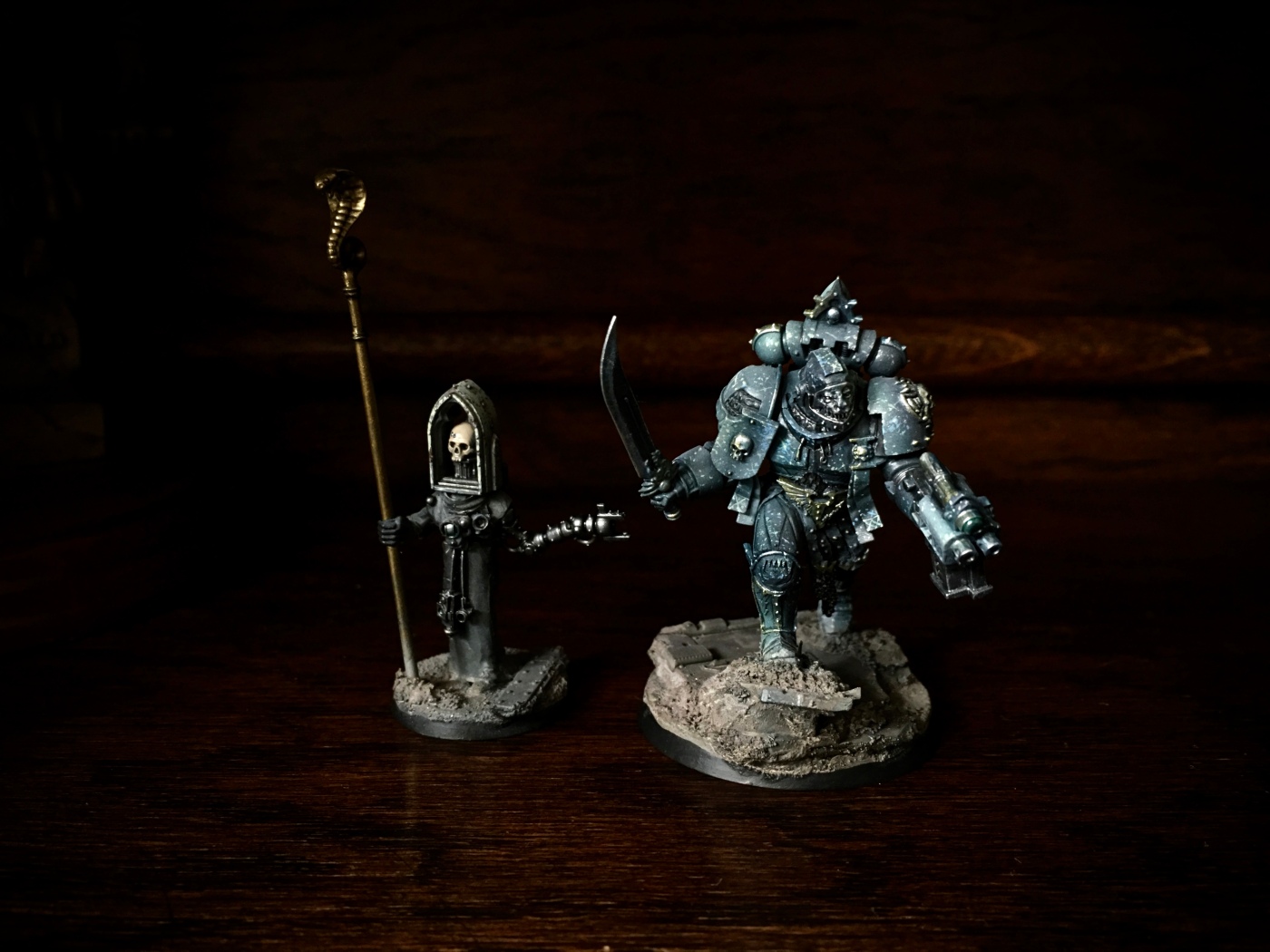 And there is a prelude: The Summon

After the monstrous undertaking that was Pilgrym, I was very happy to be invited to a very promising, landmark US “Inquisitor/Necromunda/Blanchitsu/28mm” event Curse of the Alabaster and just have a little group to build and paint.

I first considered a wild Fenrisian party, but the IV has been sent to destroy the Thorn Moons. I’ve been reading a FANTASTIC! Black library novel, Praetorian of Dorn, by John French that features the Alpha Legion in a grand way, instantly igniting my imagination. Alpharius and Jargassor are still in Nottingham, but the Legion responds.

I contemplated keeping this a secret all the way to finally revealing the masked king in a game, but my trusted council of Pilgrym’s cautioned some might find a Warrior God a sour surprise in a game, so decided a reveal after a brief tease was the way to go.

I wanted to compose a very different theme, mood, wibe and ultimately collection of hopefully exquisite miniatures. A merger of inspirations, Brando’s character in Apocalypse now, Ninjas, Erudite Warriors, Legion as described by French, my previous takes on the subject matter as a contradiction, and once again, directing an imagery Warhammer 40000 movie in my head, in a setting initiated by Shibboleth.

Still a night time utopia – but cloaked in Cameoline, I did not want to paint chipping and weathering, rather an exotic new flickering cape of night – even bolder interplay of green and blue, now including the metallics. On hyper realistic basing. I’m quite pleased where he ended up, though capturing the flowing green blue scheme was much harder than the other Alpharius’ scheme.

When Alpharius is all unmarked, warrior monk and elite clandestine operators, Anax, Headhunter Primus of the XX, Alpharius is esoteric Warrior king with a freak show servitor court, and newly masked elite mercenaries who worship him for his martial prowess.

I’ll leave you with one more image, this one shows the green blue interplay in the armor and the metallics a little better. Stay tuned for some pretty bizarre stuff to come. 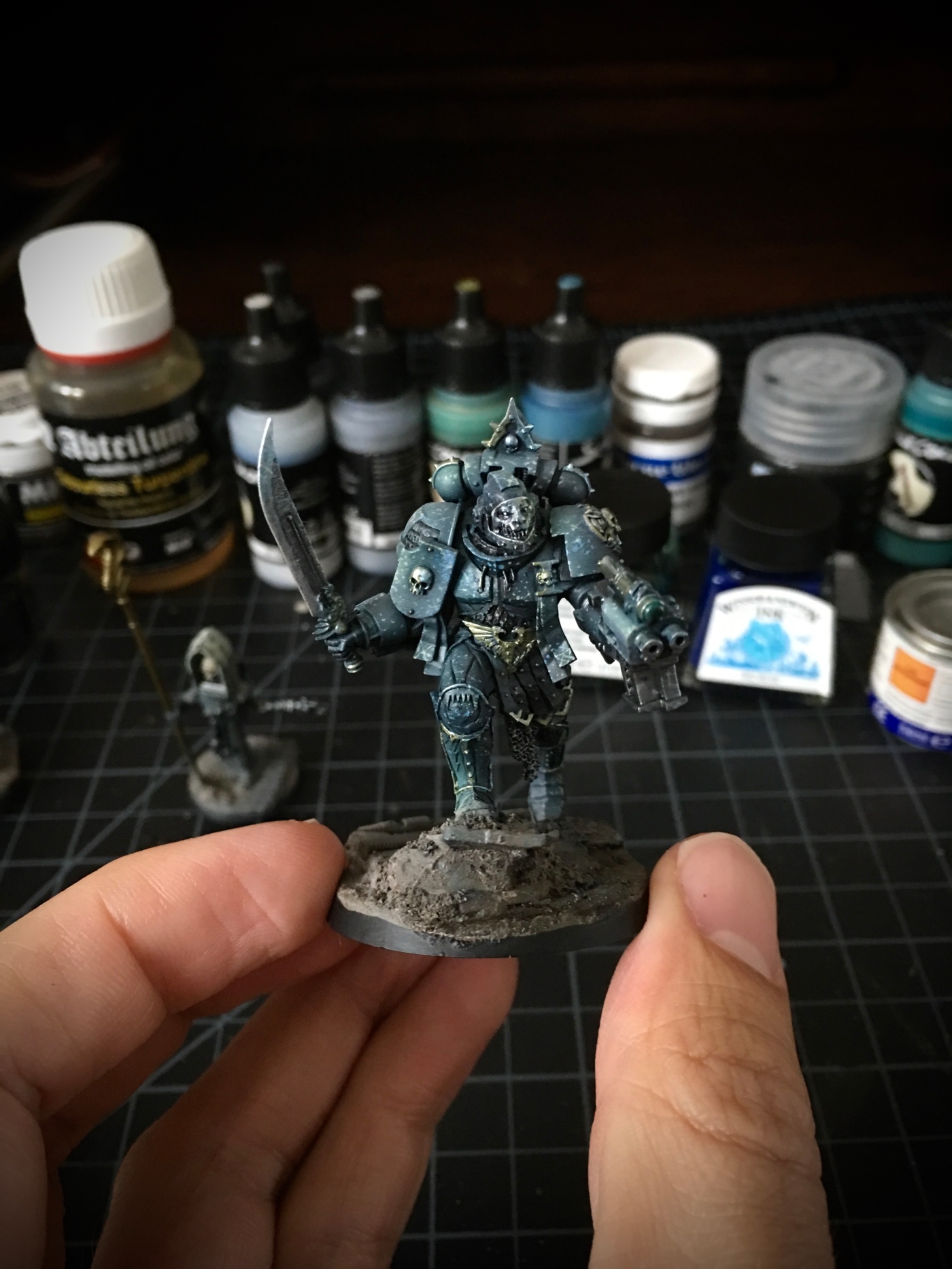