You ask why we must cleanse the xenos. I will tell you. The filth of the alien and the witch must be exterminated to preserve the purity of the Human race, lest we degenerate into abomination. 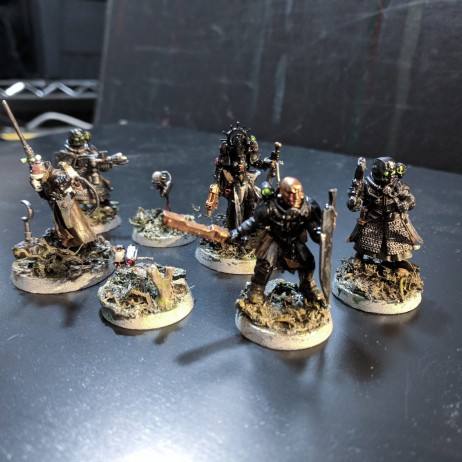 To My Humble Lords

The thundering roll of the dropships pulling away filled the square they had put down in. Soon they were left with the quiet gurgle of water and the soft clinks of the guardsman’s gear. Inquisitor Kryzwicke watched the Janissaries fan out, the platoon fellowship taking up positions among rubble and dismembered vehicles that littered the square. Her retinue of two, Brother Saemar and the witch Maliq kept close. A steady rain cut visibility down, and the mud sluiced between rampant growth that had begun to overtake everything including the buildings that edged the square. Monstrous growths of roots wound their way through the debris, and shadowed organic shapes hung in the distance, hidden by the rain and mist.

“Start plotting a route through the city now Maliq, please, and keep the cyberskulls on maximum vigilance,”

“Yes mistress, I have detected the signal of the dropped marker probe, it is six kilometers distant, North Northwest.”

The cyberskulls whirred on their miniature grav engines skirting the outside of the group and probing the way ahead. Mechanical looking roots were bursting and spreading across the ground here and seemed to grow in density as they moved further away from their landing zone. 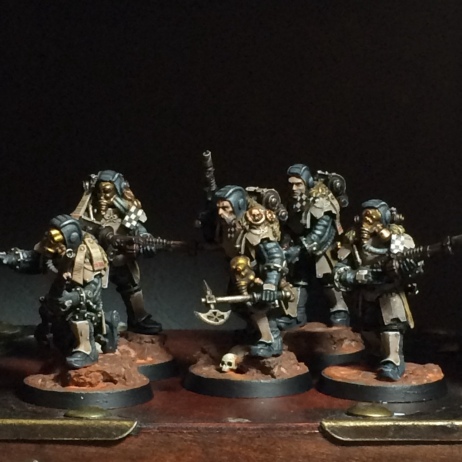 Outside of their homeworld of Medea Secundus, the Solus Company are known as a small mercenary outfit of specialist, professional soldiers. Equipped with void-hardened carapace suits, relics of the Heresy Wars, patched and repaired by generations of their own artificers, the company have become expert at assaulting from orbit. Many of the noble houses, merchant guilds and coenobite orders of the Rakshas Subsector have found themselves the subject of Solus Company action at the behest of a rival group.

Yet if they seem to simply sell their services to whomever has the coin, the reality is more complex. In truth, the Solus Company is a tool of the secretive Regents of Rakshas. These shadowy giants are rarely seen, and rumours of their true nature range from them being perfidious xenos breeds to rogue Astartes. It is the Regents who pull the strings and secretly authorise every contract the Company signs, making them a useful means to ensure that no other faction grows strong enough to challenge the their rule. 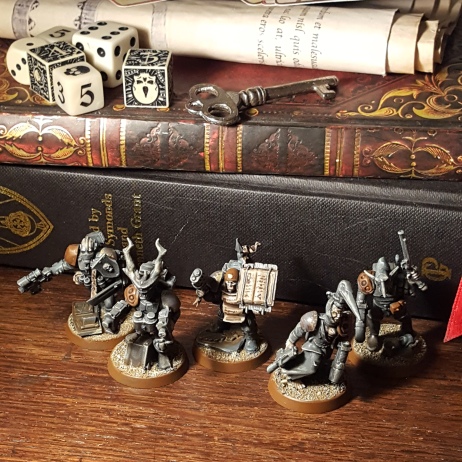 New Drekport is a Rogue Trader outpost world that was established on the far edge of the Imperium.

The Irregulars made up of the survivors and left-overs of a dozen or more Astra Militarum regiments, that were merged into a single regiment after the Ghoul Stars campaigns and the Malfactus evacuations. They are a ragtag bunch who traditionally favour somewhat outlandish and impractical masks, though no-one remembers why. The reasons seem to have been forgotten over the centuries.

They often carry personalised gear because they are too far from Imperial supply lines most of the time, so they scavenge gear from fallen enemies (and friends), buy on the black market and occasionally get additional special-issue equipment provided by the Rogue Traders, Inquisitors and other Imperial Agents that have commandeered them.

Sergeant Bech, Jag, Marl, Fylick and Confessor Vlud have recently been seconded by an Inquisitor of the Ordo Hereticus, and shipped off to the Crataegus Fragmentum to bring the Thorn Moons to compliance. 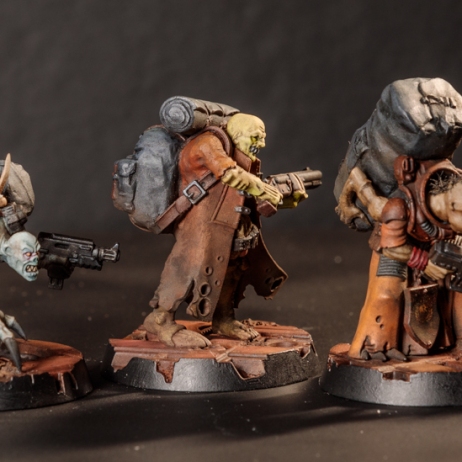 When the Captain-General of House Devereaux called for 1,000 House Guard to volunteer for an Imperial Crusade, Anders had eagerly agreed.  It was a chance to go off world, to breath something other than the hive spire’s recycled air, and escape the tedium of endless guard duty.

Now, after just two days in this place they called the Thorn Moons, as he hacked up another mouth of sickly phlegm, Anders realized what a terrible decision that had been. He hadn’t fired a shot, or even seen the enemy, but the unit was already down to 60% strength.  Most were wheezing and coughing.  Struggling just to breath, much less march or fight.  Their chirurgeon said it was the spores.  Soldiers had begun covering their faces with cloth, for lack of proper respirators.  Anders knew that was futile.  Whatever it was, they had already inhaled it.

With a pang of jealousy, he looked over to the disgusting twists who’d been press ganged into carrying their supplies.  They seemed unaffected by the local flora, in good spirits even.  The mutants had evolved to survive the toxic underhive.  A coincidence that would make them House Devereaux’s last survivors in this terrible place. 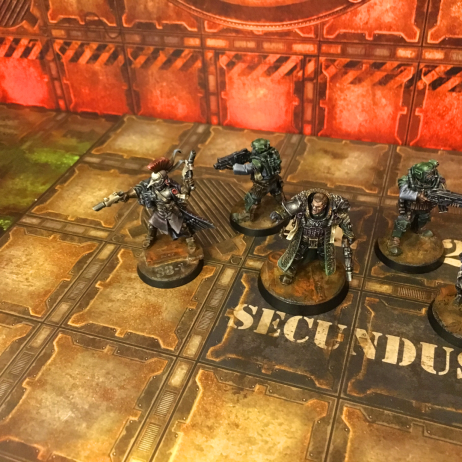 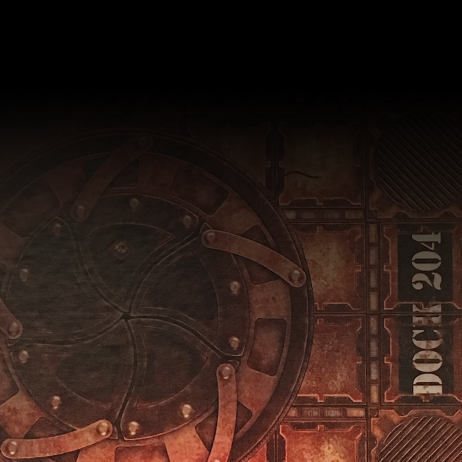 “But then what? What occurs after revelation and paralysis?”

As requested, here’s the transcript of the logs found within the Faithfuls’ Laments databanks—a class-omega space hulk discovered drifting in the Adraxian system. Amid the many derelict ships making up the beast, our long-range scans detected the signature of the Arrogant, vessel of infamous rogue trader Jurka Aibsu. If this name rings my Lord a bell, it is no surprise, for Jurka Aibsu had many run-ins with our order—I’ve added his files to the dossier.

Following standard protocols, I led a team of my own men to retrieve information regarding the fate of the Arrogant and its master. We found no opposition and quickly set up a team of datasmiths and calculus-logii to scour for intel. I believe you’ll agree the revelations contained in these logs, if true, are of immense consequences. A passage in particular should pique your curiosity:

“The Moons. The 100 Moons of the Crataegus… [indecipherable]… must ask for another audience to the Genetors… [indecipherable]… his court of mystic god-warriors. I certainly have items that could be of interest—maybe even to Green Archmagos himself?”

House Czernobog has sent a fleet to Crataegus Fragment to assess the regions value. The appointed voivod of the expedition is Vasilisa Drahomíra Czernobog, scion of the House and captain of Banneret of Acquisition. Soon the Moons will turn into a morass of attrition warfare as dropships disgorge her armies into the gardens of the Greene Mechanicvm.

The workhorse of the House armies are the Indebted, a faceless mob clad in black rubber coats. They’ve given their lives and identities to the house in hopes of one day becoming true members of the House. Most will never meet their Quota.

Leading the Indebted are the Gilded Host. They’re elite who’ve met their Quota through battle and now guide Indebted into war as they extoll the benefits of meeting the Quota.

Overseeing the proceedings of war as generals would, are the Oboźny, trueborn members of the House tasked with recording the expences of each Indepted. Every cartridge is counted and added to the Quota. Every assistance costs the Indepted months labor in the future. The Oboźny care not, Profit is everything…

One of the forces used by the House are Hussars. Trueborn clad in carapace, they carry huge wings on their back to symbolize their freedom and priviledges in the House.
Sampsa 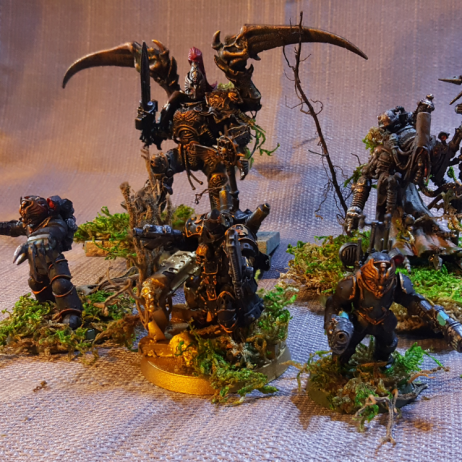 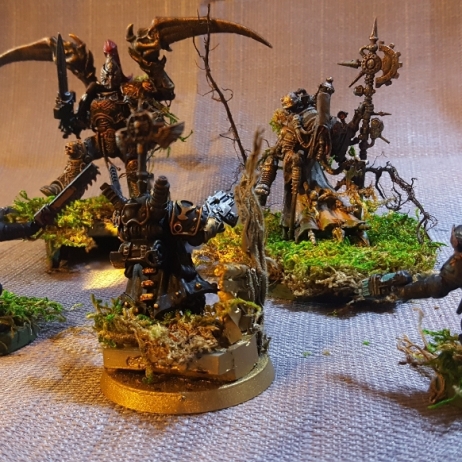 Inquisitor Morz and several of his retinue are dispatched to investigate Cerulus I.D. 99 of the Thorn Moons cluster. Reports of a being claiming to be The EMPEROR are scattered amongst several moons. Days after making planetfall Morz picks up energy emissions from a long dead city retaken by the native flora. Barely avoiding several booby traps, the group makes its way to the source of the emissions. An ancient, yet functioning AdMech plasma regulator! Though the machine has seen better days, Morz deduces that someone, or something has recently turned the regulator to full power!

A crack and snap of is heard echoing from a dank, moss strewn corridor. The men draw arms and form a protective circle! Then a voice hisses and skips like a corroded vox, “We’ve been waiting for the likes of you for six thousand years….” A hunched back Tech Priest crawled from the vegetation like some demented wretch from a womb. “Ra will see you now. Follow please……”

The second part of our Noble Houses and Imperial Agents category. A brilliant look into the types of souls attracted or obligated to assemble in this distant corner of the universe. Each are operating under their own agendas, but still feeding into the mutual struggle that is humanity in the eternal war.