All men need something to fight for, a cause to believe in. Tell them that the Emperor needs them to hold that ground at all costs, and they’ll fight like lions. 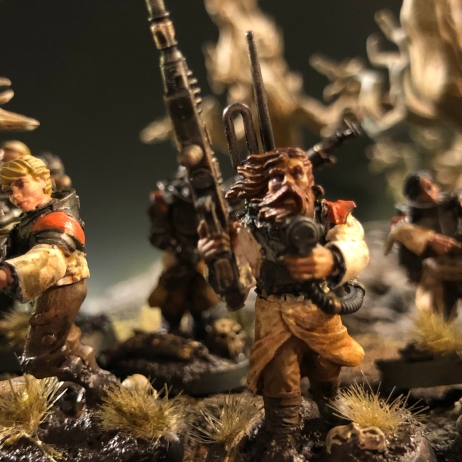 A song is the life tale of a Haddrakian, and it is a sad tune ideed. Once a prosperous mining hub for the whole Scarus sector the planet fell at the hands of a few. Civil war ripped the planet apart and many husbands, fathers and sons were selfishly sacrificed in the name of greed.

two generations of men died within only a few short years as the machine of War demanded its fuel. In the end all that was left was the frail voices of mourning. A heartwretching requiem for all that had been lost.

But as the blood of millions were washed away by the rain the voice of society rose again. A matriachy took hold of the halls and fortresses around the ravaged world and a faint glimmer of hope could be heard whispered by the wind.

But it was not to be. An Imperial decree demanded its tithe as the Thorn moon crusade passed through the system. With no men to draft the women of haddrak rose to heed the voice of the Emperor most holy.

Into the stars they flew leaving their beloved home behind – To sing the end.

In truth, in light. 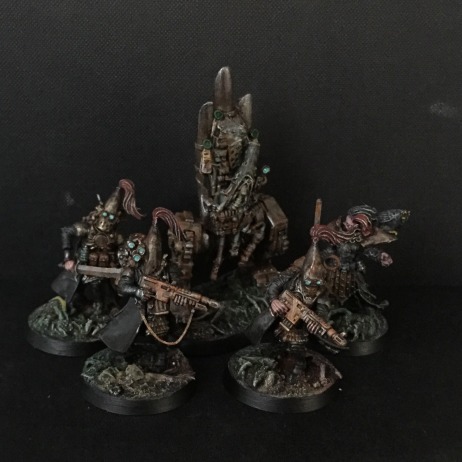 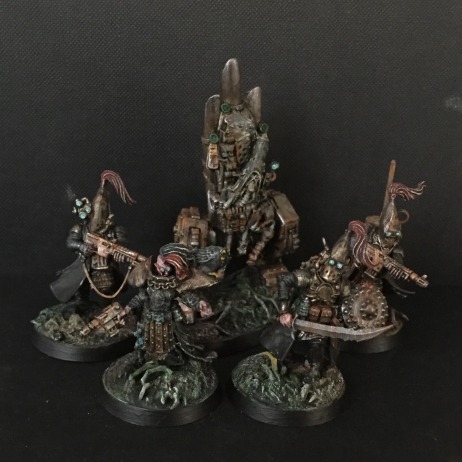 Led by the Puan Zhri Lakshmibai. This all female unit from the nursing corps has been specialised in jungle warfare and guerilla doctrine, and has been sent to the Thorn Moons to aid the training of auxiliary troops with their expertise.

Armed with autoguns as they function better than lasguns in this enviroment and clad inlight mesh armour which gives both protection and the ability to move they are well equipped for the task.

The nickname “Night Witches” comes from their doctrine of attacking in the dead of night and the fearsome ghostlike optics on their helmets as wel as utilizing Disharmonicae servitors who disrupt and stress the local wildlife. Driving the beasts towards their allocated target before sweeping in and eliminating the terrified remains. 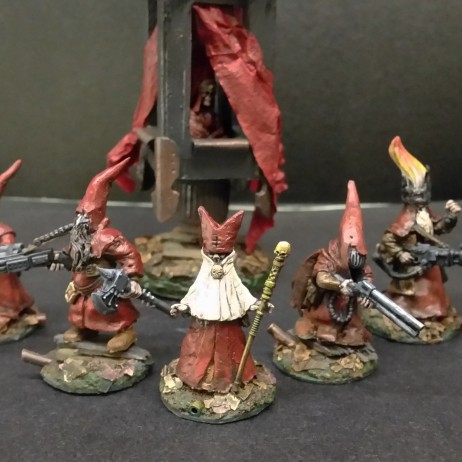 Abbess Helheimer was on her knees before a robed skeleton on the worn granite flagstones. She was dressed in black robes of mourning, with her white shawl over her misshapen, old head. The hum of the spaceship’s machinations made her numb from the vibrations. Her whispered prayers were ricocheting inside the small stone chapel. It had been carried there by pilgrims, rebuilt deep in the bowels of  Inquisitor Helmut’s ship. They had broken off from the ongoing crusade to attend to another. The Black Templar’s chapter master had even granted them the protection of a Company of Templars. The thought of their bastion-like presence made her shiver.  Like gods among men. She bit her tongue. Blasphemy! No, there was only one god, only the Emperor! They were his legacy.

The pathways had been opened, by the emperor’s blessing. To a system more mysterious than the ghoulish worlds they had cleansed of heresy in the Emperor’s name. Strange demons leapt and cavorted in the Thorn Moons’ deep forests, mingling with men at their leisure. Heretics! They would burn down every tree, every twisted trunk to purge that evil from the universe. By the Emperors’ will, and fire – a lot of fire. 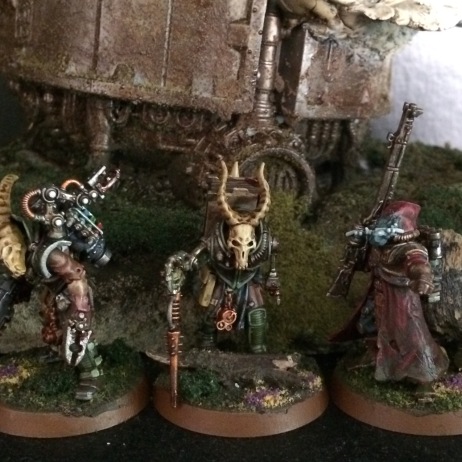 The Virologicians Sect originally consisted of disgraced Medicaes of the Holy Inquisition & Magos Biologis of Mars. Spending years studying various viruses, poisons & the flora & fauna that create them had instilled in the Teachers, or Toxicants, an appreciation for the Grandfather’s subtle gifts. Recently the Virologicians have entered into a pact with a Death Guard warband, members of the  Virologicians acting as their scouts while Toxicants learn from the Plague Casters & Surgeons. Heading planetside, they study & see if it is worth their mentors’ attention while seeding the occasional gift from the Grandfather.

To aid & protect the scholars of the Virologicians, the Plague Casters’ have provided them with the Camponoti, a crossbred hive organism that has been touched by the warp. Cultivated by the Warband, the eggs & larvae are used to infect citizens, guardsman or skitarii, providing the ability to raise bodyguards, cannon fodder & armies quickly. The Thorn Moons have peaked the curiosity of his masters’ enough that Toxicant & Master Scribe Paracelsuss has pulled himself & his apprentice away from their studies to explore the Moons first hand. They are joined by a Plague Martyr, willing hosts of Camponoti Queens & test subjects for field experiments as well as various hosts for the Camponoti. 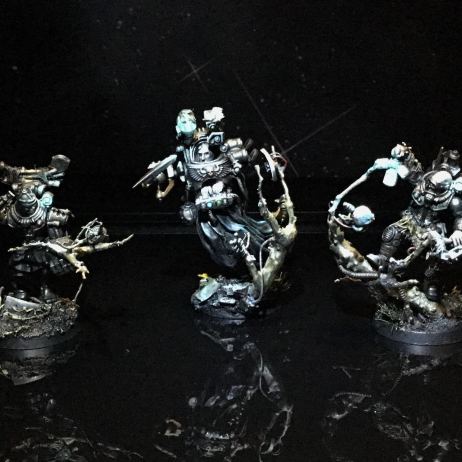 “How our violent re-materializations have set us to this moon on a pillow of irony brothers. Long have we been strangered to the tangible light of our omniscient father, set afloat nebulous maleficence, a creaking barge discovery held at tips of the tongues of daemon immaterial. To now be stranded to this creeping world of nite so similar. Our void home surrogate thrust upon us now should afford us no difference, no respite, no failure! To observe, to question, to surmise, to test, and to emperor willing, illuminate until welcomed back into his reverberated glory.”

(and now remaining survivors of its reemerging demise)

Almost wandering the the unknown nite moon after the reemergence of their vessel from warp space, the research group armed with cobbled together kit and technologies,  feverishly studies to understand their surroundings and what they may lend to the revival of their emperor recently entombed to the throne, barely sustaining him, upon their departure from mother Terra. The scavenged nature of their equipment poses problems of malfunction ranging from puttering dissonance to catastrophic explosive failure.

In the wake of the heresies that arose with Horus, in the millennium 31, doubt about the supremacy of faith in the Emperor was established in the hearts of many imperial servants.

Some groups of humans who rejected the worship of the Dark Gods began to perceive consequences in their faith to the God-Emperor, and seeing that it was not infallible, after the events of heresy, began to seek spiritual responses in new creeds.

Little by little a new chapter emerged that denied both the omnipotence of the God-Emperor and the practices of the Dark Gods. New defenders of humanity who rejected the supremacy of the Emperor, seeing in the Empire a religion as toxic and harmful to man as the Gods of Chaos.

These groups of soldiers have been fighting against the Empire and Chaos from heresy to the 41st millennium, hidden in abandoned systems, assaulting positions with low defenses, stealing imperial material and without prisoners. Their war is their redemption, their god, themselves, their name, the Renegades.

Atop the highest spire of Forgeworld Phaeton, within the holiest reliquary Gurdal Huratet, Imperator Resplendent strode amongst the countless volumes of information.  Word spread fast of the discovery of the Green Mechanicvm and their deviations from what the fools on Mars considered sacrosanct.  Striding to the south west wall of his reclusiam he willed one of his numerous limbs to reach for a misshapen skull amongst the countless that decorated the walls.  The skull was ancient and gnarled, a fusion of bone and plant growth.  For Millenia Phaeton had included the Green Mechanicvm of Thorn Moons as one of their like minded allies, their representative always a willing asset to the Council of Three in their divinations.  With but a thought the skull was shattered, its fragments cast into nothingness.  The council had spoken and the Omnissiah agreed, all ties were to be cut, immolated, scattered to the winds.  Retracting his consciousness from the council he spoke the holy words of redaction.

Children of the one true Omnissiah, hands of the great redactor.  Go forth, remove all evidence of our ties.  Purge their vaults, cleanse their sins of our holy work in the name of the true Omnissiah.

Happy holidays! We are happy to continue with the second last installment of the Invitational with a category we call Crusader Sirens, Lost Souls and Renegades. This category includes both those Thorn Moon Regiments with female leaders or all female Crusaders and those which have gone rogue or have chosen a different path than the all enlightened Imperial one.

After this we have only one category left showcasing the insane amount of Thorn Moons Regiments we have received from you in the beginning of December. It has been one constant unwrapping of the perfect holiday gifts!