“Beautiful on the surface, but rotten underneath. Don’t ever, even for a second, doubt that this is the most dangerous world in the galaxy…. Danger does not always come in the shape of Orks with bolters, Ragnar. This world is where the elite of the Imperium have gathered. We are talking now of the most ruthless, ambitious, unscrupulous collection of rogues ever culled from a million planets. This is the place they have come to realise their ambitions, and on Terra they can, and will not let anything stand in their way. Not me, not you, not their own kin if need be.”

The beginning, the home world, a temple the size of a planet.

Billions of Pilgrims live in endless queues, waiting to worship, billions more toil endlessly to keep the grinding Administratum functioning. Nothing is left of Terra’s former natural glory, the seas boiled away many millennia ago and the soil is utterly barren. Some in the Terran Mechanicus think of wood as a Xenos life form. Every square meter of the planets surface is Incredibly layered through endless growth of it’s population and built habitat. Ancient cultures and civilizations live in its labyrinth catacombs, locked in levels miles beneath sun light and in history. The noble houses soar to the skies atop the massive hive spires. These giant towers cover all of Terra apart from the Himalayans and the chamber of Astronomican carved in to it.

Terra is the heart of the imperium, the beacon of light for all of mankind. Its epicenter the Imperial Palace is an endless, black hive of forbidden technology and subterranean passages delving deep within the bowels of the planet. Deep inside resides the god Emperor, a carcass of untold power. He sits on the Golden Throne, an ancient miracle without which the Imperium of man would collapse. But time is running out.

As the light of the Astronomican grows dimmer, Techpriests discover irreparable failures in the Golden Throne,. Desperate, the Tech-Priests and Radical Inquisitors journey into the Webway and strike a dark bargain. A secret war for the fate of all humanity rages. Forces of evil and good alike hunt for a mysterious pilgrim. The Pilgrym.

Welcome to an adventure for the sagas,

PDH, Master converter and Genius GM from Preston, Thistle, (he needs no introductions, does he…) and Migs of Iron Sleet have launched on a collaborative project to study Terra unlike ever before. And we have our multi-talented friends to join us. All working towards the summer for an insane +I+munda game set in the birth place of man, Terra. The plan is to push beyond the obvious, to let each person explore the deepest boundaries of their imagination and have a ton of fun. We hope to inspire the inter webs the way the original Jade Vessel did, but at a much much more evolved scale and quality.

… And yes, there are insane models and stories in the works from Kari’s nobel breast feeders to Stefan’s Mechanicus engineered killer fauna. We seriously intend to create a gaming board that captures Terra’s scale too 🙂 Ever wonder what a forgotten, dystopian greenroom looks like? Or the massive stairs to one of Terra’s most ancient chapel?

Enough of my ramblings for now. The better way to introduce things is definitely brand new art from John Blanche. Created for the Pilgrym Project. It will be used as key inspiration for the Table to be created.

Attached is also some random gems of Pinterest, to set the mood and your expectations. I’ve tried to find art that fits somewhat with how I imagine Terra and tweaked the colors and vignetting a little to tie them together. If you happen to know the artists, please let me know so I can credit these talented chaps correctly. I have collected a wealth of visual inspiration material at Pilgrim Pinterest that you may also find interesting. 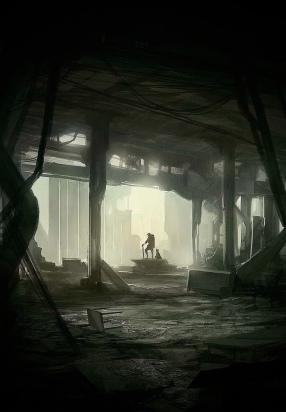