Lorde Castor Marguardt is the Ædhelinge of the cold and harsh mining world known as Mercina. He is the father of the new born baby – and now also a widow because of her. He is now forced to take a pilgrimage to Terra and seek for advice from the eldest of mankind. But lets keep the rest of his story in the dark for now…

When I was starting to build Castor, I was browsing Inquisitor rulebook for inspiration. I paused on the page with the infamous painting of Inquisitor by John Blanche. Now many of you know this one for sure…

While inspecting the art work I heard myself thinking “damn, this character sure looks a lot like a person of noble background, and hence it would be great to do something similar to my Pilgrym group”. So I did. 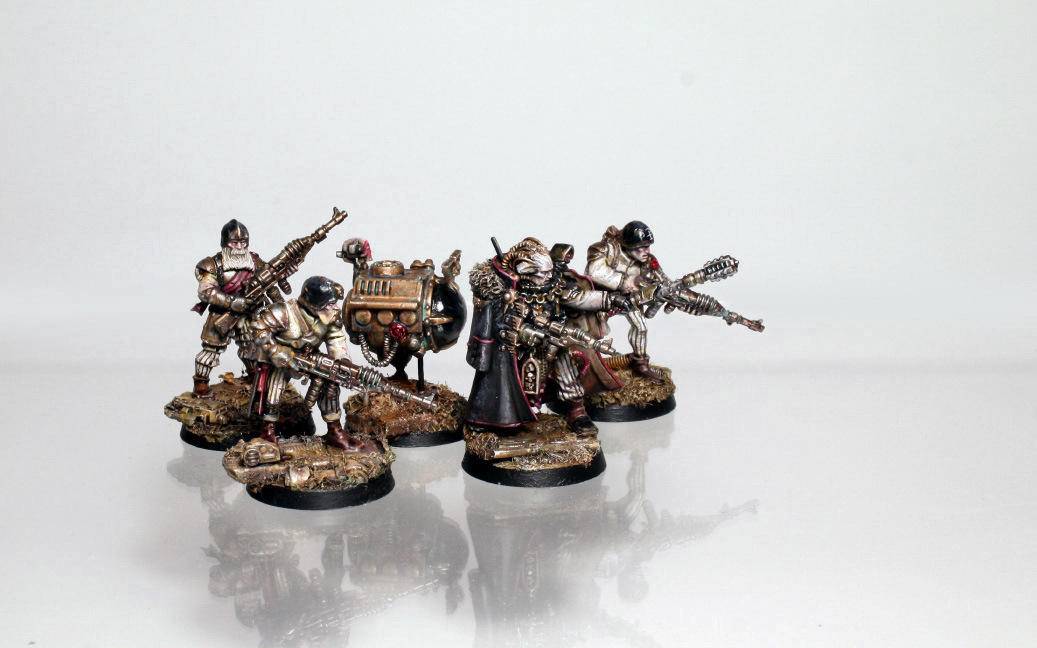 My plan was not to copy the character in the art work from head to toe, but rather try to create someone who’d ooze the similar aristocratic authority and nobility. The Militarum Tempestus Scions leader’s body with the coat fit well in my plans, since it had many cool little details that could be painted in gold. For the head I used one of the Empire handgunner heads which I modified with lots of cables and stuff. The sculpted fur on his shoulders widens his upper body, giving him more authoritarian look.

The humble human henchmen of this lot are pretty straightforward kit-bashes; Empire handgunner/greatswords bodies and heads with Skitarii Ranger arms. Their simplicity helps to boost the imposing frames of the more complex main characters.

Both Lorde Marguardt and Vogtemanne are very strong looking personalities, and this sparked a depate if the balance of the group was now skewed. There is certain friction between the father and Vogtemanne, that’s for sure. It is something I was really after for, and it should be seen in their body language and posture too – they even look in different directions, which should indicate there’s something much deeper going on. After all, Vogtemanne might be blaiming Lorde Marguardt for the death of his sister. They are like Han and Luke, both strong personalities but Han will always be the alpha, even though by a whisker. Fantastic Four (which will fit well in describing this band of powers, since there are four main character; Imettäjä, Adsum, Vogtemanne and Lorde Marguardt) does also have alpha male conflict between Johnny and Ben, and that tension makes the group dynamic much more interesting.

So with these guys ready I believe I’m done with my Pilgrym group for now. I’ve already my next miniature under way, so please stay tuned for more cool projects. Cheers!